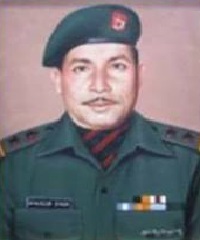 Subedar Bahadur Singh born on 10th of January, 1953 hailed from Digiana village in Jammu district of J&K. He had inclination to join the Armed Forces since his childhood and consequently joined the Army at the age of 18 years in 1971. He was recruited into 12 JAK LI of the Jammu and Kashmir Light Infantry Regiment, an infantry Regiment known for its valiant soldiers and numerous battle exploits.

By 1999, Sub Bahadur Singh had served for nearly 28 years in the Army and had experience of serving in various challenging operational areas. In 1997, he was posted to Siachen area and served there for nearly two years in the most inhospitable and difficult working environment. However as the Kargil operations commenced in early May 1999, his unit 12 JAK LI was moved to batalik sector to take part in the operation.

After the intrusions were detected in Batalik-yaldor area in the first week of May 1999, HQ 70 Infantry Brigade, part of 3 Inf Div was given control of the sector. The Brigade assumed the responsibility on 08 May 1999 with 12 JAK LI, 1/11 GR, 10 Para(SF) and Ladakh Scouts battalions. On studying the terrain and enemy intrusions of the area it was clear that a sequential approach to clear the heights occupied by the enemy was extremely difficult. It was decided to first drive a wedge in the enemy intrusion area by opening a corridor to the LOC through Junk Lungpa. This task given to 12 JAK LI along with 10 Para(SF) and a company of Ladakh Scouts was completed by 03 June 1999. Sub Bahadur Singh as an experienced Junior Commissioned Officer of 12 JAK LI played an important role in this operation.

After securing the corridor it was decided to capture Point 5203 on the eastern flank as it was the most dominating height in that area. An attack was planned with the elements of 12 JAK LI, 10 Para, and Ladakh Scouts. The attack commenced on 07/08 June 1999 and by next day morning, a portion of Point 5203 top was captured. However, during the attack, the Indian forces suffered one of its heaviest casualties that day as Capt Amol Kalia and 12 other ranks were martyred. But the battle to capture the complete feature continued thereafter with several aggressive missions. One such mission was launched on 11 June 1999 wherein Sub Bahadur Singh’s platoon was tasked to neutralize one of the enemy positions at an altitude of approximately 17,400 feet.

Sub Bahadur Singh stealthily outflanked the enemy from the North and gained proximity to the enemy. Although the enemy was well entrenched in a dominating position, Sub Bahadur Singh fearlessly fired back, killing two enemy soldiers on the spot. A fierce gun battle ensued thereafter and Sub Bahadur Singh sustained a bullet injury. However, he refused to be evacuated and continued to fire back at the enemy until he succumbed to his injuries. Sub Bahadur Singh displayed exemplary courage and determination during the operation and laid down his life for in the line of his duty. Sub Bahadur Singh was given the gallantry award, “Vir Chakra” for his outstanding bravery, fighting spirit, devotion to duty and supreme sacrifice.