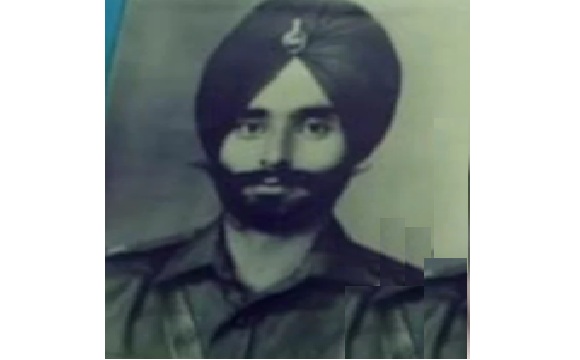 Subedar Assa Singh hailed from Jammu where his family settled down during partition after migrating from Tehsil Bagh a tiny village in POK. He had inclination to serve in the Armed Forces since his younger days and consequently joined the army after completing his education. He was recruited into 5 Sikh battalion of the Sikh Regiment, an infantry Regiment known for its intrepid soldiers and scores of battle honours.

After serving for few years, he got married to Ms Nirmal Kaur in the year 1954 and the couple had five children. By the year 1971, he had put in substantial years of service and had been promoted to the rank of Subedar. As the tensions with Pakistan escalated in 1971, his battalion 5 Sikh got deployed in Chhamb-Jaurian sector of J & K.

During Indo-Pak war in 1971, Sub Assa Singh's unit 5 Sikh was deployed in the western sector under the operational control of 191 Infantry Brigade. The Indo-Pak war of 1971 officially commenced on 03 Dec 1971 when Pakistani Air Force attacked various air fields of the IAF. Within hours after the air attack Pakistan’s 23 Division opened Artillery fire with all its nine Regiments along a 30-40 Kms front in the Chhamb sector. Soon thereafter a well-coordinated attack with armour was launched on 191 Brigade, which was the only Brigade of 10 Division of Indian Army defending the area west of the Munawar Tawi river at that time. 5 Sikh battalion commanded by Lt Col Prem Khanna was part of the 191 Brigade and was given the task of blunting the Pakistani attack. Sub Assa Singh's Company was given the responsibility of defending one of the important approaches to the sector.

Sub Assa Singh's company was occupying a key position for the defence of Chhamb, when the enemy launched an attack on night of 04 December 1971. The attack continued throughout that night and thereafter for sixteen hours but Sub Assa Singh and his troops held on gallantly and thwarted enemy’s advance.  However as the position was of strategic importance to the enemy, it launched another battalion attack on 5th morning,  preceded by heavy artillery fire. Sub Assa Singh led his soldiers in repulsing the attack forcefully. However, after this operation, Sub Assa Singh was not traceable. He is believed to have been captured and taken prisoner, as his body was never found.
A confusion continued to persist about his death, as some of the Prisoners Of War (POW) lodged in a Pakistani jail, later informed about the presence of Sub Assa Singh in Pakistani Jail.  Shri Manohar Lal from RS Pura, who was released from Pakistan in 1988, searched Sub Assa Singh's family and and told them about him in Pakistan. In 1972, from the Pakistani radio station, Sub Assa Singh said that he had been captured and confirmed his identity. In 2001, Shri Bogul Sharma of Samba, who too was released by the Pakistani authorities, confirmed that Sub Assa Singh was lodged in a jail there. Later his wife Smt Nirmal Kaur and son Shri Harcharan Singh during their search for him found many leads/evidences that gave credence to the fact that Sub Assa Singh was being kept as a POW in Pakistan. Smt Nirmal Kaur  even went to Pakistan in 2007 as part of a delegation of NOK(Next of Kin) of missing soldiers, but it yielded no result. Pakistan, however never acknowledged the presence of Sub Assa Singh in a Pakistani jail. Presently, Sub Assa Singh’s name features on the official list of the ’54 Personnel Missing in Action’, tabled in the Lok Sabha in 1979 by the then Minister of State of External Affairs Shri Samarendra Kundu.