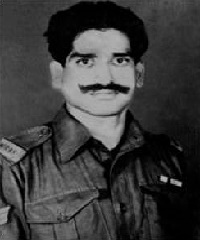 Subedar Shreedhara Das was born on 29 January 1934 in Manakkad village in Erankulam district of Kerala. Son of Sri Parameswara Panickar and Smt Karthiayani , Sub Shreedhara Das joined the Army at the age of 17 years and was inducted into the 18 Madras battalion of the Madras Regiment, a regiment with a rich history of battle honours.

By 1971, Sub Shreedhara Das had put in about 20 years of service and had served in various operational areas in different parts of the country. As a junior commissioned officer, he commanded respect of his officers as well as men under him. During the war of 1971, Sub Shreedhara Das’s unit, 18 Madras was deployed in the Nayachor/Umarkot sector on the western front and played a very crucial role in containing the Pakistani attack.

In December 1971 India had to go to war with Pakistan as the genocide perpetrated by Pakistani army in their erstwhile eastern part of the country had posed an unprecedented influx of millions of refugees. India had to fight war on its eastern as well as western and northern fronts which culminated in liberation of a new country Bangladesh. On the western front Sub Shreedhara Das unit 18 Madras, was deployed in the Nayachor/Umarkot sector of Rajasthan. Though the war was officially over on 16 Dec 1971 when the Pakistani forces surrendered on the eastern border, but the border skirmishes were continuing on the western border. By 16 Dec 1971, 18 Madras had reached positions at Hingora tar about 2 kms from Umarkot.

Sub Shreedhara Das and his men had reached Hingora Tar after a forced march of almost three days through the trackless desert. The battalion did not have artillery or the administrative cover and faced shortage of food and ammunition too. But despite the lack of artillery cover and air support Sub Shreedhara Das and his men did not lack courage and determination. In the wee hours of  17th December 1971, the enemy launched a massive attack and Sub Shreedhara Das as platoon commander, without thinking of his personal safety, moved from trench to trench encouraging his men to repulse the attack. During the process he got seriously wounded but he refused to be evacuated.

After some time the enemy launched another wave of attack and started closing in. On noticing that one of the LMGs crew had been killed, Sub Shreedhara Das himself took over and attacked the incoming enemy soldiers. However during the exchange of fire, Sub Shreedhara Das got grievously wounded and later succumbed to his injuries. Sub Shreedhara Das displayed gallantry and leadership of a very high order during the operation and laid down his life in the line of his duty.

Sub Shreedhara Das was given the gallantry award, “Vir Chakra” for his cold courage, fighting spirit, devotion to duty and supreme sacrifice.

Subedar Shreedhara Das was a platoon commander in a company of a Battalion of The Madras Regiment. On the 16th December 1971, his battalion had taken up a defended area at  Hingora Tar in the Western Sector. In the early hours of  17th December 1971, the enemy launched an attack in strength. with utter disregard to his safety, Subedar Shreedhara Das  moved from trench to trench encouraging his men to repulse the attack. Though seriously wounded, he refused to be evacuated. Half an hour later, the enemy launched another attack and this time was able to close in with the defences. Seeing that the crew of one of his Light Machine Guns had been killed, he took over the light Machine Gun and killed a number of enemy troops himself. During the fight he was seriously wounded as a result of which he died.

In this action, Subedar Shreedhara Das displayed gallantry determination and leadership of a high order.