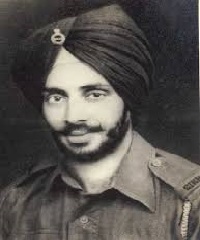 Subedar Ajit Singh was born on April 8, 1933 in Sobhana village in Jalandhar district of Punjab. Son of  Shri Ujagar Singh, Sub Ajit Singh joined the Army at the age of 19 years and was enrolled in the Sikh Regiment on 23 May 1952.
Indo-Pak war – 06 Sep 1965
During  the Indo-Pak war 1965, Sub Ajit Singh’s unit, 4 Sikh, was deployed in the Punjab sector. The battalion was assigned the task of capturing the Burki village in Pakistan. The troops decided to take the frontal approach and the time was fixed at 2000 hrs on 06 Sept 1965. When assaulting companies commenced move from their forward positions, enemy opened up with its mortars, artillery and automatic weapons from the village. The enemy fire was coming from the entire front of the village and also from the Ichhogil Canal Bank.
The Indian advance was, however, held up by a well -sited  enemy gun position. Subedar Ajit Singh was assigned the task of destroying the gun emplacement which was  holding up the Indian attack. In complete disregard of his safety, the Subedar Ajit Singh charged the emplacement single-handedly. Though wounded in the chest by a burst of medium machine gun, he pressed home the attack and destroyed  the post by lobbing a grenade through a loophole in the emplacement.
Sub Ajit Singh’s gallant act not only removed the menace of the machine gun but also inspired his comrades to destroy the enemy position. Subedar Ajit Singh later succumbed to his injuries and was martyred. Subedar Ajit Singh was awarded with the nation’s second highest gallantry award “Maha Vir Chakra” posthumously for displaying exceptional courage and devotion to duty.

On 6 September 1965, during the attack on Burki in Pakistan, Subedar Ajit Singh was given the task of destroying a gun emplacement that was holding up the attack. In complete disregard of his safety, he charged the emplacement single-handed, and though wounded in the chest by a burst of medium machine gun fire, he pressed home the attack and destroyed the post by lobbing a grenade through a loophole in the emplacement. This gallant act not only removed the menace of the machine gun post but also inspired his comrades to destroy the enemy position. Subedar Ajit Singh subsequently succumbed to his injuries.

In this action, Subedar Ajit Singh displayed supreme courage and devotion to duty of an exceptional order.