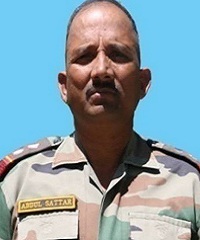 Subedar Abdul Sattar hailed from Mawa village near Didwana in Nagaur District of Rajasthan. He belonged to 13 Grenadiers of the famed the Grenadiers regiment, a regiment known for its fearless soldiers and numerous battle honours. By 2018, Sub Abdul Sattar had put in over two decades of service in the Army and had served with his unit in various operational areas with challenging working conditions.

During 2018, Subedar Abdul Sattar’s unit was deployed in Gurez Sector of Jammu & Kashmir. On 12th May , an accidental fire broke out in the camp of the unit where Sub Sattar was posted. The fire soon engulfed the arms and ammunition store of the unit located in the camp. The situation looked very dangerous and posed serious threat to the lives of the soldiers besides loss of costly weapons and ammunition. Sub Sattar on seeing the situation realized that time was very critical and decided to act himself without waiting for any external help. He realized that it was very critical to pull out as much weapons and ammunition as possible to prevent the situation from reaching threatening proportions.

Sub Sattar, without any regard for his personal safety, plunged into the inferno and managed to pull out the ammunition and weapons as much as he could. However while trying to do so he sustained 50 percent burn injuries on his body. Sub Sattar was later taken by a helicopter to Srinagar, where he was admitted to the Army Hospital (Research and Referral). He fought for his life for eight days and finally lost the battle on 20 May 2018. Sub Sattar rose to the occasion and like a true soldier, set a fine example of devotion to duty. He was a valiant and committed soldier who laid down his life in the service of the nation.

Subedar Abdul Sattar is survived by his wife Munni Banu, five daughters and a son.