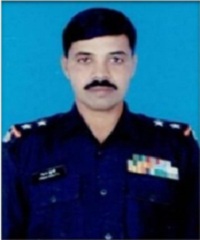 Subedar Veeresha Kurahatti hailed from Karamadi village in Gadag district of Karnataka. After completing his school education he joined the army in 1990 at the age of 18 years. He was recruited into 18 MLI of the Maratha Light Infantry regiment, an infantry regiment with a rich history of valour and battle honours. By the year-2019 he had been promoted to the rank of Subedar and had put in over 29 years of service in the army. During this period, Sub Kurahatti had served in various operational areas and gained the reputation of a dependable and courageous junior commissioned officer.

Sub Kurahatti served in challenging areas of Jammu and Kashmir most of the time during his service. He served in Andaman and Nicobar Islands in 2004-2007, J&K’s Naushera and Rajouri sectors from 2007-2009, Punjab’s Firozpur from 2010-2013, Assam from 2013-2015, Gujarat from 2015-2018 and moved to Uri sector in 2018. Sub Kurahatti was also a keen sportsman with special interest in boxing. He excelled in boxing and won many laurels for his battalion in various championships across the country.

During Dec 2019, Sub Kurahatti’s unit 18 MLI was deployed in the Baramulla district of J&K. The unit troops were manning the forward posts along the LOC in the Rampur sector of Baramulla district. This sector along the LOC was very volatile and often saw cease-fire violations by the Pakistan army. The Pakistan army regularly resorted to unprovoked firing often with a hidden aim of providing cover fire to infiltrators from across the border. In one such cease-fire violation on 25th Dec 2019, Pakistani forces attacked Indian posts in Rampur sector with artillery shelling. On that day, Sub Kurahatti was manning one of the forward posts that bore the brunt of the attack.

Indian army troops swung into action to give a befitting reply to the unprovoked firing from across the border. A heavy exchange of fire followed thereafter lasting for several hours. However, during the exchange of fire Sub Kurahatti sustained splinter injuries and was seriously injured. He was shifted to the nearby medical facility but he later succumbed to his injuries and was martyred. Sub Kurahatti was a gallant soldier and a committed junior commissioned officer who laid down his life in the line of his duty following the highest traditions of the Indian army.

Subedar Veeresha Kurahatti is survived by his wife, son and daughter.