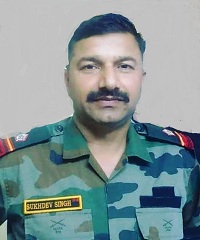 On 05 Oct 2020, in the evening around 1900 hrs Pakistan Army troops initiated unprovoked firing on Indian posts from across the border in Nowshera Sector of Rajouri district. During that period, Sub Sukhdev Singh was supervising the forward posts along the Line of Control in the Nowshera sector. The Pakistani troops violated the ceasefire and resorted to heavy cross border firing at Kalal, Lam and Jhangad sectors along the LOC. Indian army responded in a befitting manner to the Pakistani aggression and consequently, a heavy exchange of fire ensued thereafter, which continued intermittently for several hours. However, during this heavy exchange of fire, Sub Sukhdev Singh got severely injured. He was shifted to the Army medical facility but he succumbed to his injuries and was martyred. Sub Sukhdev Singh was a valiant soldier and a committed junior commissioned officer, who laid down his life in the line of his duty. Sub Sukhdev Singh was given the gallantry award, “Sena Medal” on 26 Jan 2021 for his courage, camaraderie, devotion to duty, and supreme sacrifice.