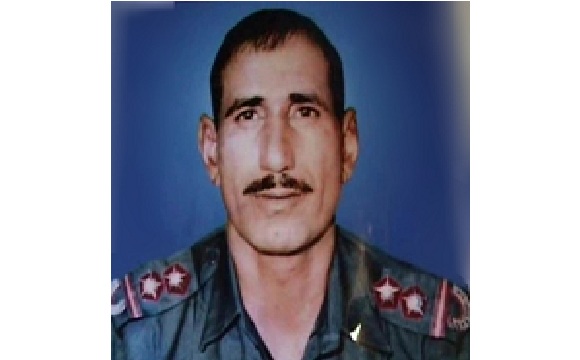 Sub Randhir Singh hailed from Balkara village in Dadri-ii Block of Bhiwani district in Haryana. Son of Shri Choudry Kannaiah Lal Kaliraman and was born on 15 Jul 1955. After completing his schooling he joined the Army and was inducted into 18 Grenadiers of the Grenadiers Regiment, an infantry Regiment known for its valiant soldiers and various battle honours.

During June 1999, Sub Randhir Singh’s unit was deployed in drass sector. Tololing feature was indicative of the deepest penetration made by Pakistan in Drass sector. By holding features of Hump, Point  5140, Point 4700 and area ‘Three Pimple’the enemy had ensured a secure route of maintenance for its troops at Tololing. 18 Grenadiers was tasked to capture Hump and also provide support to 18 Garhwal Rifles in its attack on Point 5140. Sub Randhir Singh became part of the team that was tasked to capture Hump feature.

Sub Randhir Singh  was given the gallantry award, “Vir Chakra” for his outstanding grit, determination, devotion to duty and supreme sacrifice.

On 03 June 1999, Subedar Randhir Singh was tasked to lead his platoon for assault on the tactically important Tololing ridge in the Drass sector during 'Operations Vijay'. The well-stocked and fortified post of the enemy-backed infiltrators was in a treacherous mountainous terrain covered with snow at height of over 15,000 feet. The advance of the platoon, led by Subedar Randhir Singh, was impeded due to heavy machine gun fire from one of the sangar of the intruders. He immediately deployed his platoon and with a small team crawled ahead to the sangar and neutralized the machine gun in close combat killing two intruders. In the process Subedar Randhir Singh sustained grievous injury but pressed ahead directing, motivating and leading his platoon from the front and refusing to be evacuated or abandoning the mission. On encountering a second enemy sangar, though badly injured and bleeding, he charged onto the enemy killing one intruder in a hand-to hand combat. His dare devil act inspired and motivated his men to charge onto the enemy thus gaining vital ground on Tololing ridge which facilitated the capture of Point 4599.
Subedar Randhir Singh later succumbed to his injuries making the supreme sacrifice for the nation but not before leading and accomplishing a difficult mission.