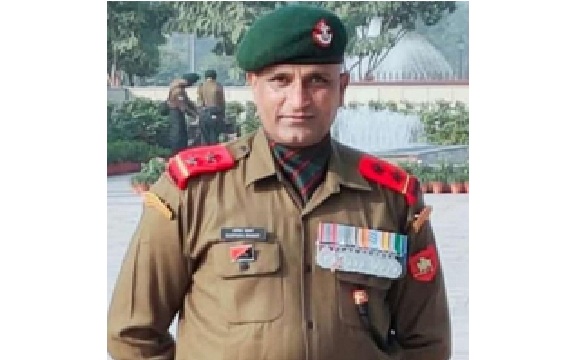 Sub Rajendra Prasad Bhambhu hailed from the Maligaon village in Kashim Pura taluk of Jhunjhunu district in Rajasthan and was born on 1st July 1974. Son of an army veteran Badru Singh, he had a younger brother Rajesh Kumar and a sister Mukesh as his siblings. Right from his younger days, he always wished to follow in the footsteps of his father and don the Army uniform. Following his dream, he joined the army after completing his school education on 23 February 1995 at the age of 21 years.  He was recruited into 11 Raj Rif battalion of the Rajputana Rifles Regiment, an infantry Regiment known for its brave soldiers and numerous battle honours. After completing his training, he served in various operational areas and developed into a fine soldier with admirable leadership skills.

He got married to Ms. Taramani in June 1994 and the couple had two daughters Priya, Sakshi, and a son Anshul. During the Kargil war in 1999, his unit was deployed in the battle zone and he became part of various operations as part of "Operation Vijay". By 2022, he had been promoted to the rank of Subedar and had put in over 25 years of service. By then, he had developed into a committed soldier and dependable Junior Commissioned officer, who could handle important operational assignments. Besides being a dedicated soldier, Sub Rajendra Prasad was a good human being too and was involved in various welfare activities for the local population in the Dahral area, in and around his 11 Raj Rif battalion.  He was also making preparations for the wedding of his elder daughter as he was to retire from the service in the year 2023, but destiny had something else in store for him.

During 2022, Sub Rajendra Prasad‘s unit 11 Raj Rif battalion was deployed in the Rajouri district of J&K. The unit troops were engaged in operations against the terrorists on a regular basis as the unit's area of responsibility (AOR) was active with militancy. The area was also prone to infiltration, which necessitated regular armed patrols to check any infiltration from across the border. The AOR of the unit also spanned over dense jungle and remote rugged mountainous terrain with extreme weather conditions, especially in the winter season. On 11 Aug 2022, a group of armed terrorist dressed in police uniforms attacked the 11 Raj Rif base at the Parghal area in Darhal tehsil of Rajouri district.

At around 2 AM on 11 Aug 2022, alert sentries of the 11 Raj Rif post detected suspicious persons approaching their post taking advantage of the inclement weather and dense foliage. On being challenged, the two terrorists threw grenades and attempted to gain entry inside the post.  As the situation turned dangerous and took threatening proportions, Sub Rajendra Prasad and some more troops of the unit joined the operation. A fierce gun battle ensued thereafter as the troops cordoned off the area and engaged the terrorists thereby pinning them down. The gun battle continued for four hours with a heavy exchange of fire from both sides. Eventually Sub Rajendra Prasad and his comrades managed to eliminate the two terrorists who had dared to attack the 11 Raj Rif post. However during the exchange of fire, Sub Rajendra Prasad and five other soldiers got severely injured in the operation. The injured soldiers were shifted to the medical facility of the Army, but Sub Rajendra Prasad and three other soldiers Rifleman Manoj Kumar, Rifleman Nishant Malik and Rifleman Lakshmanan D soon succumbed to their injuries and were martyred. Another soldier Hav Satyapal Singh too lost the battle for life after a few days. Sub Rajendra Prasad was a fearless and committed junior commissioned officer, who laid down his life in the line of his duty.