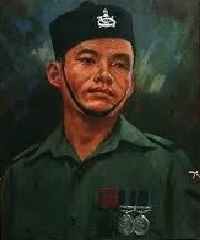 Sub Maj Kharka Bahadur Limbu hailed from Mantri village in Imphal district of Manipur. He joined the Assam Rifles on 05 December, 1929 and thereafter took part in various operations and wars including the Word War II. He took part in the Burma Campaign during the World War II and was given the gallantry award, “Military Cross” by the British for his extraordinary courage and bravery during the war. Son of Shri Arthvir Limbu, Sub Maj Limbu developed into a committed soldier and earned the respect of his officers and men under him as well.

By the year 1961, he had been promoted to the rank of Subedar Major and evolved into a dependable junior commissioned officer with his superior field-craft skills and substantial experience in warfare.

During 1961, Sub Maj Limbu’s unit was deployed in the Nagaland and was engaged in counter-insurgency operations on a regular basis. The AOR(Area of responsibility) of the unit was affected by the anti-national activities of the Naga insurgents who would attack the security forces every now and then. Consequently the unit troops had to maintain a very high level of alert at all times and be prepared for action at a very short notice. Based on the information from the intelligence sources, 8 Assam Rif planned one such counter-insurgency operation on 26 Apr 1961 under the leadership of Sub Maj Limbu. The operation was planned essentially to neutralize the threat of Naga militants, hiding in a hideout in thick jungles, falling under the AOR of the unit.

Sub Maj Limbu set off for the operation along with his comrades and reached the suspected area in the early morning of 26 Apr. The hideout was located in an inaccessible forest and was built around a pit with bamboo barricades all around it. Sub Maj Limbu quickly cordoned off the area and deployed his soldiers tactically to deal with any eventuality. After breaking the barricades, Sub Maj Limbu leading the attack charged at the militants and eliminated two of them, while taking possession of their weapons. However, while doing so he got hit by a bullet and got seriously injured. But without caring for his injuries, he crawled forward and lobbed two grenades in the militants’ bunker killing three of them. He continued giving instructions to his men and motivating them till all the militants were neutralized. Sub Maj Limbu later succumbed to his injuries and was martyred. Sub Maj Limbu was a gallant soldier and an inspiring junior commissioned officer, who led from the front and laid down his life in the line of his duty.