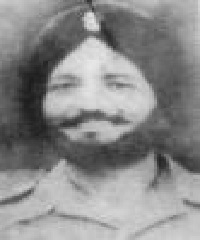 Sub Bishan Singh hailed from Purnain village in Ludhiana district of Punjab and was born on 14th Jan 1917. He was enrolled in the Sikh Regiment on 14 Jan 1933 at the age of 16 years. After completing his training he served in various operational; areas including Word War II.  He distinguished himself as a soldier in the Second World War and won honours and titles like Sardar Bahadur, OBI and MC.

During December 1947, Sub Bishan Singh’s unit, 1 Sikh was deployed in Jammu & Kashmir, and was the first unit to be involved in the J & K Operations or Indo-Pakistani War of 1947 which began in October 1947 as Indian troops went into action to repel a planned invasion of J&K by armed tribesmen from Pakistan.

On 12th Dec 1947, at Uri, the Sikh regiment was out on a fighting patrol against the tribesmen in Kashmir State. The enemy, who was occupying previously prepared bunker position, opened fire on the leading company of the battalion killing 10 men on the spot and wounding another 15. These 15 wounded soldiers were lying within 10 yards of an enemy position. The enemy was attempting, under very heavy covering fire, to pull in these casualties and capture their arms and was at the same time carrying out an encircling movement round this position. At this juncture D company of 1 Sikh was ordered to attack from the left flank and Sub Bishan Singh was commanding one of its forward platoons.

Sub Bishan Singh charged at the enemy with incredible determination and ferocity. He pressed on with hand-to-hand combat and was the first to draw blood with his bayonet. Although wounded, he killed five of the enemy soldiers. Inspired by his raw courage his comrades fought with double vigour and created panic among the enemy soldiers. The enemy broke and fled and thus the objective was achieved. However as Sub Bishan Singh was standing on top of a bunker, a burst of enemy LMG hit him in the chest, wounding him grievously. He succumbed to his injuries and was martyred leaving behind a tale of unparalleled courage and sacrifice. Sub Bishan Singh was a gallant soldier and gritty Junior Commissioned Officer who led from the front and made the supreme sacrifice in the line of his duty.

On 12 December 1947 at Uri, a battalion of Sikh Regiment was out on a patrol. At about 1340 hours the battalion bumped the enemy in strength and a fierce hand-to-hand fight took place. During the withdrawal, Subedar Bishan Singh was second in charge of a company, which was holding the last layback position. A fierce hand-to-hand fight again took place. Subedar Bishan Singh with what was left of his small company organized a counter-attack. Although wounded in the right arm, he personally led his company, bayoneted two of the enemy with his own hands. Another wave of enemy attacked and Subedar Bishan Singh was wounded for a second time, but with utter contempt for his life this brave officer led his men on, cheering and encouraging. He killed another couple of the enemy with his bayonet. This so demoralized the enemy that they fled in all directions. Subedar Bishan Singh was then chasing the fleeing enemy, shouting cries of "Sat Sri Akal". It was then that this brave VCO paid the highest price for his outstanding gallantry. He was killed by a bullet in the chest.

As act of cool courage, inspiring leadership and dogged determination against heavy odds, this outstanding example would find few to surpass it. This gallant action fought by this brave officer to death enabled the battalion to evacuate all its casualties to safety and gave the enemy a bloody wound to lick.