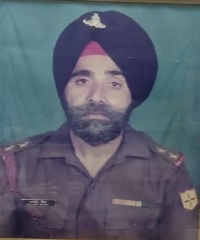 Subedar Balbir Singh was born on 21 January 1959 in the Tehsil-Dera Bassi, District at Punjab. Son of S. Jagir Singh and Smt Angrej Kaur, he completed his schooling from the Government Middle (now High) School, Dappar and thereafter he passed his matriculation from Government High School, Derabassi (a nearby town in SAS Nagar district of Punjab). He was younger to his three brothers and elder to four brother/sisters. One of his elder brothers Subedar Major (Now retired) Amar Singh and one younger brother Havildar (Now retired) Jagtar Singh too served in the Army.

Sub Balbir Singh nursed the idea of serving in the Armed Forces since his childhood and followed into the footsteps of his elder brother. After passing his matriculation examination, he got selected as a “Technical Assistant” for the Regiment of Artillery and was enrolled on 12 September 1976. Subsequently he got his basic training at the Artillery Centre, Hyderabad. (AP). Later after getting the requisite qualification, he was promoted to the ranks of Naik, Havildar, Naib Subedar and Subedar. While he was serving as a Naik/Havildar, he was selected to undergo the course for the post of “Assistant in Gunnery” (AIG) and achieved the ranks of Regiment Havildar Major (RHM), Naib Subedar, and Subedar in this category/trade. After completion of AIG course, he was selected as “Instructor” for imparting the Bofors gun training to the NCOs/JCOs/Officers of the Regiment of Artillery at the School of Artillery Devlali (Maharashtra).

During the year 1999, Sub Balbir Singh was serving with 153 Medium Regiment which was deployed at Ferozepur Cantt in Punjab. However when Indian Army launched "Op Vijay" in response to the large scale infiltration by Pak forces in J&K, 153 Med Regt was moved to Batalik Sub sector in early July 1999. Sub Balbir Singh and his unit troops got involved into thick of operations, immediately on deployment. He was tasked to perform the duties of a Gun Position Officer (GPO) for a detachment of six Bofors guns. Right from 06 July 1999, Sub Balbir Singh's gun detachment destroyed many Pakistani guns, ammunition dumps and bunkers.

Though Kargil war officially came to an end on 26 July 1999, border skirmishes and enemy hostile actions continued thereafter too, albeit with less intensity. Sub Balbir Singh and his troops were maintaining a very high state of alert at all times and giving a befitting reply to the unprovoked cross-border firing. In another incident of unprovoked enemy firing Sub Balbir Singh's gun position received a direct hit on 08th August, 1999. The blast had devastating effect severely injuring ten soldiers and mortally wounding one NCO. Sub Balbir Singh also got injured seriously with bomb splinters hitting the back of his neck. He was airlifted and rushed to the Military Hospital at Srinagar for medical treatment. However the brave-heart later succumbed to his injuries on 10th August, 1999 at about 05.30 AM.

Sub Balbir Singh was a valiant soldier and a gritty Junior Commissioned Officer, who led from the front and laid down his life in the line of his duty. Sub Balbir Singh was given the gallantry award, “Sena Medal” (Posthumously) for his outstanding courage, devotion to duty and supreme sacrifice.