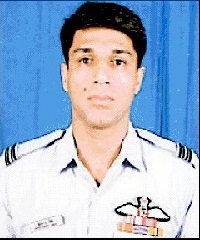 Squadron Leader Shailendra Singh was born in Jammu in a family having a military background. Son of an army officer Late Col Birendra Singh and Mrs Vinod Singh, he was always inclined to join the Armed Forces since his childhood. Unfortunately his father passed away in the year 1981 when he was barely seven years old, but his mother Mrs Vinod Singh brought him up single-handedly and encouraged him to follow his dream. His dream of joining the Armed Forces was fulfilled when he was selected to join the Indian Air Force. He further got selected to be trained as a fighter pilot and was trained to fly Jaguar aircraft among other fighter jets.

After his basic training, he was posted to the field unit flying Jaguar fighter aircraft. Besides, serving at various Jaguar squadrons, he was also posted at the Basic Flying Training School (BFTS) in Allahabad as a Flying Instructor. Sqn Ldr Shailendra Singh later joined the prestigious Surya Kiran Aerobatic Team (SKAT) based at Air Force station, Bidar in Andhra Pradesh.

During 2005-06, Sqn Ldr Shailendra Singh was serving with 52 Sqn based at Air Force station Bidar. This sqn also known as SKAT was an aircraft aerobatic demonstration team of IAF. The Kiran aircraft employed in the aerobatic flew at speeds between 200 and 600 kmph during maneuvers and were exploited to the end of its abilities by the SKAT.

The team served as an ambassador of the Indian Air Force to showcase its prowess and professionalism. The aerobatics team always consisted of very experienced and highly skilled pilots as its role demanded flying skills of a very high level. All members of the SKAT were qualified flying instructors and were among the best fighter pilots in the IAF. These pilots whose main job was to fly highly risky aerobatic formations were selected after a rigorous selection process. It was one of the most coveted jobs in the IAF owing to the accolade, admiration and respect that SKAT enjoyed in the IAF as well as people at large.