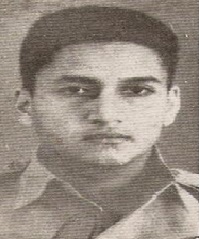 Squadron Leader Mandepanda Appachu Ganapathy was born in Kodagu in Karnataka. He was commissioned in the Indian Air Force on 16 May 1965. He belonged to the 22 Squadron Unit and was awarded the third highest gallantry award, Vir Chakra in 1972 for his exemplary skills during the Battle of Boyra in 1971, where he shot down a Sabre Fighter Jet of the enemy. He was in the Air Force working as Flight Lieutenant at the time of the Battle of Boyra and he rose up to the rank of Squadron Leader.

During the Boyra encounter, the 22 Squadron stationed in Calcutta spotted the enemy Sabre Jets on their radar at about 1448 hours. Within three minutes at about 1451 hours, four Gnats set off to counter the mighty Sabres. Flight lieutenant M.A. Ganapathy was with flying officer Don Lazarus in a formation that included Flight Lieutenant Roy Massey and flying officer K B Bagchi in command.

The four Gnats separated into two sections and dived into the attack to bounce the Sabres. The first section of Gnats was of Massey and Fg Offr SF Soarez as his No.2. The second section consisted of Flt Lt MA Ganapathy and Fg Offr D Lazarus. As the Gnats dived in, a section of two Sabres pulled out of the attack and placed themselves in an awkward position, just in front of Ganapathy and Lazarus. Ganapathy saw the opening and realised that it was the best time to attack. He gave commands over the radio to Don Lazarus to gun the sabres down. Both the pilots did not waste time on this perfect opportunity. Cannon shells slammed into the pair of Sabres and both the Sabres were badly damaged. Massey, in the meantime, pulled up over Ganapathy and Lazarus to latch onto another Sabre. A vicious fight followed leading to an exchange of bursts. Wg Cdr Chaudhary was in the enemy Sabre. In the dogfight with the Gnats, both Wg Cdr Chaudhary and Flt Lt Massey drifted apart outside the Indian territory to East Pakistan. Wg Cdr Chaudhary’s sabre was badly damaged and he managed to land safely in Tezgaon Airfield just outside Dhaka and Flt Lt Massay regrouped and joined his formation.

The 22 Squadron was called Sabre Slayers owing to their history of tackling and gunning down the Sabres. Flt Ldr Ganapathy and his men did not disappoint this time either as they gunned down three more enemy Sabres and prevented infiltration. Sqn Ldr M A Ganapathy was awarded Vir Chakra for his acts in the Battle of Boyra. He died in unusual circumstances as he took his own life a few years later.

On 22 November 1971, at 1450 hours order was given to intercept four Pakistani aircraft, which had intruded our territory. Flight Lieutenant Nandepanda Appachu Ganapathy, who was No. 3 in a formation of four Gnat aircraft, proceeded to intercept the enemy. On sighting the enemy aircraft, he skillfully maneuvered his section and got behind one Sabre jet and shot it down.