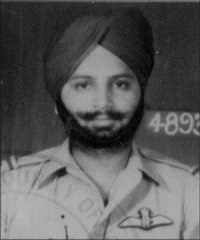 Sqn Ldr Jiwa Singh after his initial training was posted to various Air Force bases and gained experience in flying different types of aircraft. By 1971, Sqn Ldr Jiwa Singh had already completed 16 years of service in the Air Force and  evolved into a competent and ace pilot having expertise in various types of air operations. During 1971, he was serving with  26 Sqn  operating fighter bomber SU-7 aircraft.

Citation for the Vir Chakra awarded to  him reads:-

At the outbreak of hostilities with Pakistan in 7th December, 1971, Squadron Leader Jiwa Singh was on the strength of a Fighter Squadron.  During the operations; Squadron Leader Jiwa Singh on 7th December 1971, led a formation to search and strike enemy tanks and troops which were engaging our ground forces.  He successfully located the hidden tank positions and pressed home his attack even though his section was encircled by four enemy aircraft.  He engaged an enemy F-104 in an aerial Combat so that his number two could get away to safety.  In the combat, his aircraft was shot at low level as a result of which he was killed.