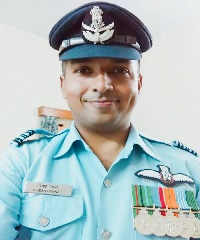 Squadron Leader D Pankaj was an ace fighter pilot of the IAF having considerable experience in flying various aircraft. During 2017, Sqn Ldr Pankaj was posted to a Su-30 operating fighter squadron located at Air Force base Tezpur, which is  172 km from the China border. The Sukhoi Su-30 is a Russian-made, twin-engine fighter meant for all-weather, air-to-air and air-to-surface missions. The first of the Su-30 planes were inducted by the IAF in the late 1990s.

On May 23, 2017, at around 10.30 AM Squadron Leader Pankaj along with Flight Lieutenant Achudev took off in their Su-30 aircraft from Air Force Station Tezpur. They were flying as part of the operational training task in a two-aircraft formation. The pilots are tasked to carry out various flying maneuvers and procedures as part of their operational training.  The plane went off the radar around 11:10 AM near Arunachal Pradesh’s Doulasang area, adjoining China.

A massive search was taken up to locate the aircraft and the missing pilots. The wreckage was found on May 26 through aerial recce, in a thick forest around 60 km from Tezpur. Search and rescue teams initially found a blood-stained shoe, half-burnt PAN card and a wallet of one of the two pilots. The fighter jet’s black-box was recovered later on by teams comprising the Army, the Air Force, and civil administration personnel.

Squadron Leader D Pankaj could not eject at the time of the crash, according to the analysis of the jet’s Flight Data Recorder and some other articles recovered from the crash site. He could not survive the crash and the precious life of a professionally competent fighter pilot was lost in the horrific accident. Squadron Leader D Pankaj was a valiant air warrior and a committed soldier who laid down his life in the service of the nation in the highest traditions of Indian Air Force.

Squadron Leader Pankaj is survived by his wife Richa, daughter, parents and a younger brother.