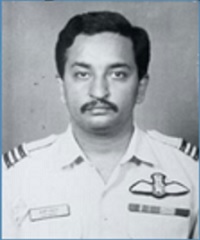 Squadron Leader Ajay Ahuja was born on 22 May 1963 in Kota, Rajasthan. He completed his schooling from Saint Paul’s Senior Secondary School, Kota. He later graduated from the National Defence Academy and was commissioned as a fighter pilot on 14 June 1985 in the IAF. By 1999, Sqn Ldr Ahuja had completed about 15 years of service and had evolved into a professionally competent pilot and a committed air warrior.

As a fighter pilot Sqn Ldr Ahuja flew the MiG-23 fighter-bomber and MiG-21 variants and had a  flying experience of over 1,000 hours. He was also a qualified flying Instructor and was extremely popular among his pupils owing to his patience  and cheerful nature. Sqn Ldr Ahuja had moved to the Airbase at Bhatinda, on posting in 1997. He had just taken over as the Flight Commander of Squadron No.17, Golden Arrows, a specialist photo-reconnaissance squadron, when the Kargil War broke out in May 1999.

On 27 May 1999, as part of “Operation Safed Sagar” in Kargil, a photo reconnaissance mission was launched over the Indian side of the line of control in Kashmir. Just as he was about to take flight, Sqn Ldr Ahuja was informed that a fellow officer , Flt Lt Nachiketa had ejected from his MiG-27 aircraft after an engine flame out. Sqn Ldr. Ajay Ahuja took it upon himself to locate his fellow officer and  stayed over infiltrator held positions to help the rescue attempts. Despite the threat of surface-to-air missiles in the area he stayed on and by sheer perseverance, could locate the possible location of the crashed aircraft and the pilot.

Sqn Ldr Ahuja passed on the crucial information to the mission control room to enable them to launch the rescue helicopters. However, his MiG-21MF fighter, C-1539, was hit by a shoulder-fired FIM-92 Stinger missile. Sqn Ldr Ahuja gave a radio call – “Hercules, something has hit my plane, possibility of missile hit cannot be ruled out, I am ejecting over…(location).”.With exemplary presence of mind and professionalism he attempted to steer the aircraft towards a safer area. But when the aircraft engine flamed out, Sqn Ldr Ahuja had no choice but to eject. He ejected safely and had the presence of mind to transmit his last recorded ground position. But under dubious circumstances he got killed and was martyred. The body of Sqn Ldr Ajay Ahuja was handed over to Indian authorities by Pakistan on 28 May 1999. Sqn Ldr Ajay Ahuja displayed exceptional courage in going beyond the call of duty for carrying out the assigned search mission.

Squadron Leader Ajay Ahuja was the Flight Commander of MIG-21 Squadron inducted into Srinagar as part of “Operation Safed Sagar” in Kargil. On 27 May 1999, he was tasked to lead a two aircraft mission for photoreconnaissance of enemy position in the Batalik Sector. As he was getting airborne he was informed that Flight Lieutenant Nachiketa had ejected from his MiG-27 after an engine “flame out” in the vicinity of Muntho Dhalo. Squadron Leader Ajay Ahuja immediately realized the necessity of locating and recovering the downed pilot. He changed his mission profile and set course towards Muntho Dhalo. Despite being told that surface-to-air missiles were being fired in the area, Squadron Leader Ahuja carried out orbits to try and pinpoint the location of the crashed aircraft and pilot. He sent his No. 2 back to base but himself continued the search, ignoring the threat to his own life.

By sheer perseverance, he was able to locate the possible crash site and transmitted this information to the rescue helicopters. Unfortunately, at this stage, his own aircraft was hit by “Stinger” surface-to-air missile (SAM). With exemplary presence of mind and cool professionalism he attempted to steer the aircraft towards a safer area. But when the aircraft engine flamed out Squadron Leader Ajay Ahuja had no choice but to eject. He ejected safely and had the presence of mind to transmit his last recorded ground position. On 28 May 1999 the body of Squadron Leader Ajay Ahuja was handed over to Indian authorities. The body bore two bullet injuries. Squadron Leader Ajay Ahuja displayed exceptional courage in going beyond the call of duty while searching for a downed brother officer.

According to the data released by the Indian Air Force, Sqn Ldr Ahuja’s aircraft had been within the Indian side of the Line of Control. A post-mortem examination conducted at the Srinagar Base Hospital claimed that Sqn Ldr Ahuja had landed safely after ejecting from his plane, but had been killed later by Pakistani soldiers.

It was reported that the left knee fracture was sustained when he parachuted down, but the gunshots showed that he landed alive and was shot. And his death was called as a cold blooded murder. On 15 June 1999 The Deputy high commissioner of the Pakistani Embassy in New Delhi was summoned and a notice for the breach of Geneva conventions was submitted for the torture and killing of the prisoners of War during the Kargil War. The Government of India lodged a protest with Pakistan’s ambassador, accusing the Pakistani paramilitary forces of having fired at Sqn Ldr Ajay Ahuja while still descending in his parachute. Pakistani authorities denied the accusations and suggested Sqn Ldr Ahuja was killed due to accidental injuries during the ejection or landing. No further investigations were carried out by either government or outside entities and the case remains unresolved.