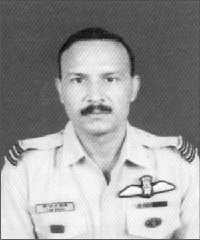 Squadron Leader Tarique Jamil Ahmad Khan was born on 16 Dec 1963 and was commissioned into the Indian Air Force at the age of 22 years. He got trained as a fighter pilot and underwent various stages of flying training before joining a front line Air Force base. By the year 2002, Sqn Ldr Khan had over 3000 hours of flying experience and had evolved into an ace fighter pilot with expertise in various air operations and tactics. He had also acquired professional qualifications of a Fighter Combat Leader and Qualified Flying Instructor besides undergoing the prestigious course at Defence Services Staff College, Wellington.

During 2002, Sqn Ldr Tarique Jamil Ahmad Khan was serving with MiG Operational Flying Training Unit (MOFTU), the largest fighter unit of IAF undertaking Stage-III fighter-flying training. He was functioning as a flying instructor for the pilots undergoing Stage-III training and had to fly multiple sorties in a day on a regular basis. On 20 Apr 2002, Sqn Ldr Khan was undertaking another such sortie along with Fg Offr Deepak Dahiya. It was a two aircraft formation training for an air combat mission. As planned Sqn Ldr Khan and Fg Offr Deepak Dahiya took off the Indian Air force base located in Sonitpur district of Assam. The first leg of the mission went off as planned but on its return leg the MiG-21 aircraft with Sqn Ldr Khan and Fg Offr Deepak Dahiya on board lost contact with ground control and went missing.

The second aircraft of the formation landed back to the base safely but the aircraft being flown by Sqn Ldr Khan and Fg Offr Deepak Dahiya went off the radar while flying over Darrang district of Lower Assam near Koipani village. The area was surrounded by inaccessible thick forest which made the search extremely difficult. An extensive search operation was launched by Army, police, railway police and IAF personnel with helicopters for the missing aircraft but they could not locate the debris of the aircraft.  Tragically two professionally competent pilots were lost in this horrific accident. Sqn Ldr TJA Khan was a committed soldier and dedicated air warrior who laid down his life in the line of his duty. Sqn Ldr TJA Khan was given, “Vishisht Seva Medal” posthumously for his selfless service, courage, devotion to duty and sacrifice.

Squadron Leader Tarique Jamil Ahmed Khan (18072) F (P) was commissioned as a Fighter Pilot in the IAF in 1985. A highly accomplished flier with over 3000 hours of flying experience, he is a Fighter Combat Leader, Qualified Flying Instructor and a graduate of the Defence Services Staff College, Wellington. He holds ‘Three Stars’ for accident free flying and ‘Master Green’ instrument rating. He has served as a flying instructor in a flying training establishment and as flight commander in a Fighter Squadron in earlier assignments.

Sqn Ldr Khan had been on the posted strength of MiG Operational Flying Training Unit (MOFTU), wef 29 April 2001. MOFTU is the largest fighter unit of IAF and it undertakes Stage-III fighter-flying training. In the absence of a Wing Commander due to service exigencies, Sqn Ldr Khan had officiated as the Squadron Commander of MOFTU ‘Alpha’ Squadron from his first day in the unit.

Despite being thrust into a job with a higher work content and increased responsibility, he had performed his duties with admirable efficiency. He flew extensively and worked for long hours with sincerity and dedication, among other things, to help pass out 164 and 165 Pilots’ courses in time. He had worked beyond the call of duty on many occasions to meet all tasks. During this period, trainee and staff pilots in MOFTU had performed well in all professional spheres and for this Sqn Ldr Khan had a significant part to play. Besides his primary job, he had performed all additional responsibilities in a befitting manner. His administrative ability was stood out and he had made significant contributions in many areas of activity in the unit including construction of the MOFTU museum.