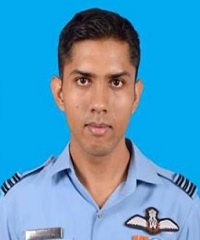 Sqn Ldr Siddhartha Negi hailed from Dehradun in Uttarakhand. Son of Shri Balbir Singh Negi and Smt Suchitra Negi, Sqn Ldr Siddhartha Negi studied from Kendriya Vidyalaya Dehradun and later got selected to join the prestigious NDA in 2005. He passed out of the NDA as part of the 114 th Course and joined the Air Force Academy near Hyderabad for his flying training as part of 183 Pilots’ Course. He was commissioned in the fighter stream of the IAF on 27 June 2009. Sqn Ldr Siddhartha Negi was a trained fighter pilot of the IAF having more than 2000 hours of flying on various types of aircraft. He underwent the Flight Test Course at AFTPS, part of ASTE and became one of the youngest Experimental Test Pilots(ETP) in 2018. Before being posted to the Bangalore based elite Air Force unit, Aircraft and Systems Testing Establishment (ASTE), he had served in two front-line Air Force bases operating Jaguar fighter aircraft.

After gaining expertise in flying various types of fighter aircraft, Sqn Ldr Siddhartha Negi got selected as a test pilot and was posted to the IAF’s premier Aircraft and Systems Testing Establishment (ASTE). The ASTE is one of the few institutions in the world which evaluates aircraft and systems for induction into user organization(IAF) and has on its strength the pilots, who have the best flying skills and are capable of flying high-risk certification missions. Sqn Ldr Siddhartha Negi was one such pilot serving with the ASTE and was engaged in carrying out various acceptance trial sorties for aircraft produced/upgraded by the Hindustan Aeronautics Limited(HAL). Sqn Ldr Siddhartha Negi was an avid sportsman and excelled in Squash. He was part of the Command HQs Squash team and won many accolades in various tournaments. He also played cricket, football, and basketball besides being a passionate traveler. Sqn Ldr Siddhartha Negi got married to Sqn Ldr Dhruvika Raj, in December 2015, who is currently serving in the IAF.

During 2018-19, Sqn Ldr Siddhartha Negi was serving with ASTE as a test pilot and was conducting certification missions on a regular basis. The missions were essentially undertaken to check the functioning of the systems/sub-systems for their conformity to the standards acceptable by the IAF. On 01st of February 2019, Sqn Ldr Siddhartha Negi and Sqn Ldr Samir Abrol were tasked for one such acceptance trial sortie on an upgraded Mirage 2000 trainer aircraft. This aircraft had already been flown six times by the test pilots at HAL and it was the second customer(IAF) sortie. Sqn Ldr Siddhartha Negi and Sqn Ldr Samir Abrol both were experienced pilots and knew their task well. After the necessary flying briefing, both pilots took off as planned.

However, during the takeoff roll, there was an uncontrollable technical snag and the aircraft hit the arrest-barrier at the end of the runway and dragged it. Sqn Ldr Siddhartha Negi and Sqn Ldr Samir Abrol were forced to eject but it was too late. The parachutes got deployed but both the pilots sustained serious injuries as they fell near to the burning wreckage of the aircraft. Sqn Ldr Samir Abrol and Sqn Ldr Siddhartha Negi later succumbed to their injuries and the IAF lost two valiant and committed air warriors in a tragic manner. Sqn Ldr Siddhartha Negi was a valiant air warrior and ace fighter pilot, who at the young age of 31 years laid down his life in the service of the nation, on the day which ironically happened to be his birthday.