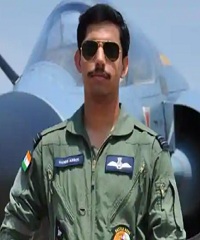 Place of Birth : Ghaziabad, (UP)

Squadron Leader Samir Abrol, born on 17 July 1986 hailed from Ghaziabad in Uttar Pradesh. Son of Shri Sanjeev Abrol and Smt Sushma Abrol, Sqn Ldr Samir Abrol came from a business family, but he had a dream to join the armed forces right from his childhood. After completing his schooling from Ryan International School Ghaziabad, he pursued his dream and joined the prestigious NDA. He got selected for the IAF in the flying branch and was commissioned into the Indian Air Force in the fighter stream on 21 June 2008. Sqn Ldr Samir Abrol was a trained fighter pilot of the IAF having more than 3500 hours of flying to his credit. He had the experience of flying several aircraft such as Sukhoi-30, Tejas, Hawks, and Jaguars, but the Mirage 2000 was special to him. Before being posted to the Bangalore based elite Air Force unit, Aircraft and Systems Testing Establishment (ASTE), he had served in various front-line Air Force bases operating different types of fighter aircraft.

However, during the takeoff roll, there was an uncontrollable technical snag and the aircraft hit the arrest-barrier at the end of the runway and dragged it. Sqn Ldr Samir Abrol and Sqn Ldr Siddarth Negi were forced to eject but it was too late. The parachutes got deployed but both the pilots sustained serious injuries as they fell near to the burning wreckage of the aircraft. Sqn Ldr Samir Abrol and Sqn Ldr Siddarth Negi later succumbed to their injuries and the IAF lost two valiant and committed air warriors in a tragic manner. Sqn Ldr Samir Abrol was a dedicated soldier and a professional competent air warrior who laid down his life in the service of the nation.