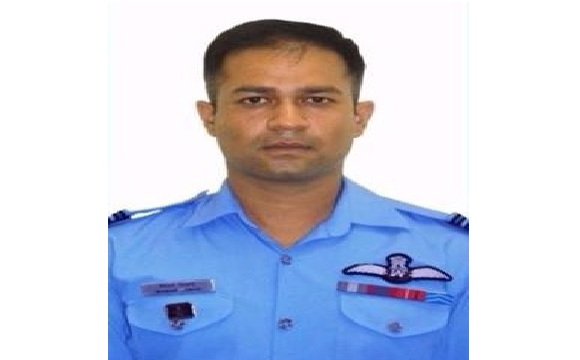 Place of birth : Ghaziabad, UP

Squadron Leader Shishir Tewari hailed from Ghaziabad in Uttar Pradesh. He was commissioned into the Indian Air Force on 19 June 2010.  He got trained as a helicopter pilot and passed out as part of 185th Pilots' Course.  On completing of his training he got posted to the field units, where he gained experience in operating various types of aircraft in his initial years of service.  By 2017, Sqn Ldr S Tewari had evolved into an a competent helicopter pilot having expertise in various air operations. In 2017, he was serving with a helicopter unit based under Eastern Air Command of the IAF.  Sqn Ldr S Tewari’s unit was operating MI-17 transport helicopter, extensively used for air transport and logistics operations.

During October 2017, Sqn Ldr S Tewari was serving with 157 HU AF unit , equipped with Mi-17 V5 Helicopter and was based at  Air Force Station Barrackpore in West Bengal.  At that time a number of Indian army units were deployed at many far-flung areas in the northeast sector where no motorable roads existed. The most of the supplies to these units were dependent on airdrops, undertaken by Indian Air Force as Air Maintenance operations. Sqn Ldr S Tewari  was tasked for one such air maintenance mission as co-pilot of the aircraft on 6th October 2017.  Sqn Ldr  Shishir Tewari had with him Wg Cdr Vikas Upadhyay as his captain, Master Warrant Officer A K Singh and Sergeant Satish Kumar as his flight gunners and Sergeant Gautam Kumar as the flight engineer. Besides the air crew two Army personnel Sepoy H N Deka and Sepoy E Balaji were also detailed to be part of the air maintenance mission.

Sqn Ldr  Shishir Tewari and Wg Cdr Vikas Upadhyay along with five other personnel in their Mi-17 V5 helicopter took off from Khirmu helipad in Tawang district on 06 Oct 2017.  The flight path of the sortie was vulnerable to dangerous weather changes, but Sqn Ldr  Shishir Tewari and Wg Cdr Vikas Upadhyay were experienced pilots and had handled many such situations earlier.  As the aircraft was on air maintenance sortie, it was carrying supplies to the forward posts in Topokhar near the Yangste area. This was the second air maintenance sortie of the day for the aircraft in that forward area.  At around 6 AM, as the supplies were being dropped in the dropping zone about 120 kms north of Tawang, the net holding the jerry cans of kerosene being offloaded, got entangled in the aircraft’s rear rotor. As a result, the chopper caught fire instantly and crashed, giving no chance to the pilots to take any action. Sqn Ldr  Shishir Tewari and all other 6 on-board military personnel including Wg Cdr  Vikas Upadhyay, MWO A K Singh, Sgt Satish Kumar, Sgt Gautam Kumar, Sep H N Deka and Sep E Balaji, could not survive the crash.

Sqn Ldr  Shishir Tewari was a professionally competent pilot and a committed soldier, who laid down his life in the service of the nation. Sqn Ldr Shishir Tewari is survived by his wife Smt Prakrity Tewari.