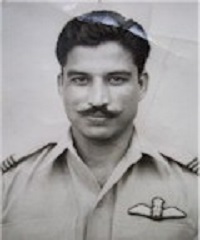 Sqn Ldr Raman Kumar Uppal hailed from Punjab and was born on 22nd Aug 1932. He got selected for the prestigious NDA and joined the 62nd Course. He was commissioned into the Indian Air Force as Pilot Officer on 16 Jan 1954 at the age of 22 years. He joined the flying stream of the IAF and got trained as a fighter pilot. After completing his flying training, he served with various flying squadrons located at different Air Force bases. He became a Flying Officer on 16 Jan 1955 and later got promoted to Flt Lt and Sqn Ldr. By 1965, he had put in around 11 years of service and had been promoted to the rank of Squadron Leader. By that he had evolved into an ace fighter pilot having expertise in various air operations.

During 1965, Sqn Ldr RK Uppal was serving with 1 Sqn, known as “The Tigers" and was based at Air Force Station Adampur. 1 Squadron of the Indian Air Force was formed at Karachi on 01 April 1933 and was equipped with Westland Wapiti aircraft. In 1953 the Squadron moved to Palam and then to Air Force Base at Kalaikunda in 1957 with Squadron Leader Dilbagh Singh(who later became Chief of Air Staff) as its commanding officer. The squadron took part in "Operation Vijay" for the liberation of Goa in 1961 under the command of Sqn Ldr S Bhattacharya and equipped with Mystere-IVa aircraft. In 1963, the squadron moved to Adampur, an airbase that was to remain its home for the next 17 years. When hostilities broke out in 1965 the unit under the command of Wg Cdr OP Taneja undertook various offensive air operations. Sqn Ldr RK Uppal was tasked for one such operation on 11 Sep 1965.

The first strike mission was flown by 1 Sqn on the morning of September 6th, when a strike of four Mysteres attacked a railway train at Ghakker. The formation was intercepted by an F-104 Starfighter, but the aircraft came back unscathed flying at low level.  A pre-emptive air strike by PAF against our forward air bases was carried out on Sep 6th evening and Adampur air base happened to be one of them. The next day 1 Sqn was tasked to hit the PAF's main airbase of Sargodha housing nealry half of the enemy's strength of aircraft. Thus 1 Sqn had the distinction of being the first IAF unit to attack a PAF Airfield in the war. Thereafter in days to follow, Sqn Ldr RK Uppal and his comrades were tasked with the airfield Air Defence, offensive strike missions against heavily defended Pakistani airfields and interdiction of major lines of communication.  On 11 Sep 1965 Sqn Ldr RK Uppal was tasked for another such mission to attack the enemy lines of communication at Kasur.

On 11 Sep Sqn Ldr RK Uppal was a part of a four aircraft formation tasked to destroy a bridge at Kasur. Earlier 1 Sqn aircraft had carried out attacks against Pak Army assets and destroyed 18 tanks. As Kasur was militarily significant for the enemy, it was heavily defended by its air defense assets. Undeterred Sqn Ldr RK Uppal and his comrades carried out the attack and made multiple passes to neutralize the assigned target. However Sqn Ldr Uppal's aircraft took a direct hit by the enemy anti-aircraft guns and caught fire. As a result the aircraft crashed and Sqn Ldr Uppal was martyred.  Sqn Ldr RK Uppal was a brave and committed air warrior, who laid down his life at the age of 33 years in the service of the nation.