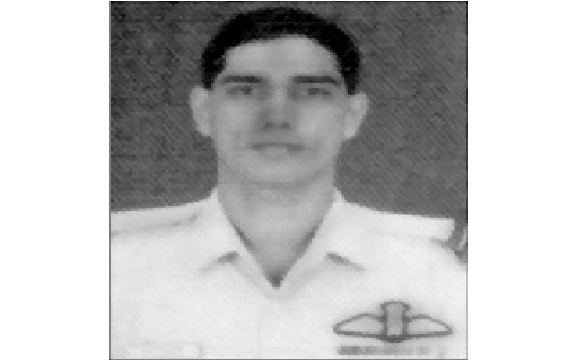 Squadron Leader Prashant Kumar Bundela hailed from Jhunjhunu district in Rajasthan and was born on 14 Dec 1970. After completing his schooling he got selected to join the prestigious NDA. He joined the NDA course and then went to the Air Force Academy for his further training. He was commissioned into the IAF as a pilot officer on 14 Dec 1991. He got trained as a fighter pilot and passed out as a part of 148th Pilots' Course.

After completing his flying training, Sqn Ldr Prashant Kumar Bundela served with various flying squadrons located at different Air Force bases. After serving for a couple of years he got married to Ms Meera and the couple had daughter Prachi. During 1999, Sqn Ldr Bundela was serving with 45 Sqn based at a forward Airbase in Gujarat. On 10 August 1999, Sqn Ldr Bundela was part of two IAF MiG-21 aircraft of 45 Sqn which took off from the Air Force base at 11 a.m. to investigate an "unidentified" aircraft at India's side of the border. They identified the intruder as a Pakistani Atlantique reconnaissance aircraft. After a series of maneuvers, they got the clearance to shoot down the Pakistani plane. Sqn Ldr Bundela fired an air-to-air missile and successfully brought it down. Sqn Ldr Bundela was awarded 'Vayu Sena Medal" on 26 Jan 2000 for his gallantry and exceptional professional skills.

On Aug 2002, Sqn Ldr Prashant Kumar Bundela was serving with 32 Squadron based at Air Force base at Jodhpur in Rajasthan. The 32 Squadron was raised at Jodhpur on 15 October 1963 with Wing Commander Emanuel Raymond Fernandes as its first commanding officer. Initially it was equipped with Mystere aircraft but the Squadron later got converted and graduated to supersonic era with SU-7 aircraft and shifted its base to Ambala. In 1984 the squadron again moved to Jodhpur with Wing Commander Arun Vasant Sathaye as its commanding officer. During April 2002, the squadron was operating MiG-21 aircraft under the command of Wing Commander Rajiv Jain. Sqn Ldr Bundela by that time had gathered substantial experience in varous air operations.

On 4 April 2002, Sqn Ldr Bundela was on a training sortie for an air combat mission in a MIG-21 Bison aircraft. When he reached Jhelu-Gagari village in Jodhpur district, his aircraft engine developed a serous technical snag and became uncontrollable. Sqn Ldr Bundela eventually ejected, but he landed on his neck and broke his vital neck bone. He immediately went in to quadriplegia (paralysis of the upper and lower limbs due to severe injury on the cervical spine). He underwent medical treatment for a long time and eventually lost the battle for life on 19 August 2002. Sqn Ldr Bundela was a valiant soldier and committed air warrior, who laid down his life in the line of his duty.

Squadron Leader Prashant Kumar Bundela (21540) Flying (Pilot) was commissioned in the fighter stream on 14 Dec 91 and is posted to a Fighter Squadron in the Western Sector. He has acquitted himself exceptionally during his service, achieving a high level of professional competence. On 10 Aug 99, Sqn Ldr Bundela was the leader of a two aircraft MiG-21 Bis live AD alert mission. After several hours of resolute alert state, at 1100 hrs Sqn Ldr Bundela's mission was scrambled by the radar unit to intercept an unidentified track approaching the international border, North-West of Naliya. After scrambling expeditiously, Sqn Ldr Bundela took his formation to meet the threat and made visual contact with the unidentified aircraft which had crossed the border into Indian airspace and correctly identified the aircraft as a Pakistan Navy Atlantique Maritime Reconnaissance Aircraft.

Squadron Leader Bundela asked his Wingman to identify the intruder and judged that intruder was engaged in a hostile Reconnaissance/Elint/Probe Mission. Squadron Leader Bundela first tried to instruct the intruder through visual signals to land at the designated Indian Air Base. However, instead of following these instructions, the intruder turned menacingly towards Sqn Ldr Bundela. On establishing the intruder's hostile intentions Sqn Ldr Bundela, keeping his composure under enemy threat, fired an Air to Air Missile at the intruder. The intruder was brought down by the single missile finding its mark. The threat to our air space and hostile action of the enemy was thus neutralized.

For this conspicuous act of gallantry in the face of the enemy and for displaying professionalism, the Hon'ble President is pleased to award 'Vayu Sena Medal' to Squadron Leader Prashant Kumar Bundela.