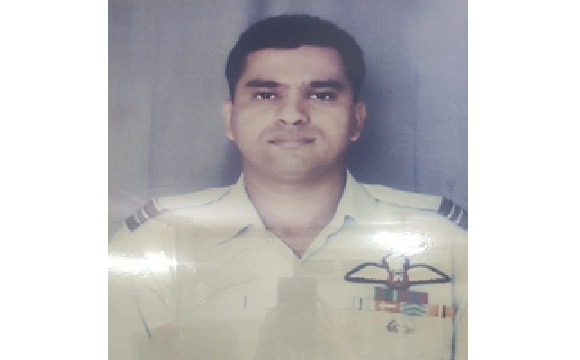 Sqn Ldr Pramod Kumar Chhikara was born on 19 Dec 1974 and hailed from Narela in Delhi. Son of Late Shri Baljeet Singh Chhikara and Smt Savitri Chhikara, he did his initial schooling from Holy Child School Sonipat in Haryana and then got selected for the prestigious Rashtriya Indian Military College(RIMC) Dehradun. Right from his younger days he was fascinated with the Air Force and always aspired to become an Air Force pilot. While studying at RIMC his inclination towards the Armed Forces grew and the foundation of his future military life was laid at this place. His resolve to join the Armed Forces grew with the age and consequently, he got selected for the prestigious NDA after finishing school.

He joined NDA in the year 1993 and excelled in various fields during his training. He became the Cadet Captain in the last term and also received President's medal for being the best cadet. Later he went to the Air Force Academy in Hyderabad and did extremely well there too in various aspects of training. He got commissioned as a Flying Officer, having been  inducted into the fighter stream of the IAF and got trained as a fighter pilot. After completing his multi-stage flying training, he joined the operational squadron and thereafter served at various Air Force bases. He served in Air Force bases at Allahabad in Uttar Pradesh, Bagdogra in the East and Uttarlai in Rajasthan. Later he got trained on MIg-29 aircraft and served in a frontline Squadron based at Adampur in Punjab.

After serving for few years, he got married to Ms Sudha Hooda a practicing Supreme Court lawyer on 02 Mar 2001, when he was posted at Air Force base Adampur. Subsequently he got posted to another frontline fighter Squadron based at Air Force base at Naliya in Gujarat. In the year 2004, he also had the distinction of participating in the fly past of MiG-29 aircraft during the Republic Parade. By 2006, he had put in about 10 years of service and had been promoted to the rank of Squadron Leader.

During Mar 2006, Sqn Ldr Pramod Kumar Chhikara was serving with 101 Sqn based at Air Force base Uttarlai in Barmer district of Rajasthan. During peacetime training is one of the most important activities of IAF which helps it to remain prepared to take on any eventuality. A war-like situation is created in the air for the pilots to practice and remain updated. Sqn Ldr Chhikara too was undertaking training sorties to practice complex air operations on a regular basis. On 21 May 2006, Sqn Ldr Pramod Kumar Chhikara was undertaking another such sortie along with Flt Lt Aniket Baliram Kolhe.

It was a training sortie for an air combat mission in a MIG-21 trainer aircraft. As planned Sqn Ldr Pramod Kumar Chhikara and Flt Lt Aniket took off from Uttarlai airbase after completing the necessary operational checks on ground. However, soon after the take off, the aircraft developed serious snag and became uncontrollable. The pilots did not get enough time to take emergency actions and lost contact with the ground control. Eventually the aircraft caught fire and crashed around 3:35 PM and the bodies of the pilots were found near the crash site by the rescue helicopter. The pilots Sqn Ldr Pramod Kumar and Flt Lt Aniket managed to avert any damage to the civilian property but lost their lives. Sqn Ldr Pramod Kumar Chhikara was a valiant soldier and committed air warrior, who laid down his life in the line of his duty.