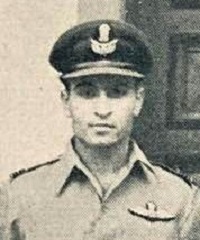 Born on 16th Mar 1933, Sqn Ldr Narinder Kumar Malik after completing his schooling joined the interim training academy, known as the Joint Services Wing (JSW). The JSW was commissioned on 1 January 1949 at the Armed Forces Academy (now known as the Indian Military Academy) in Dehradun.  He passed out from JSW ion 01 Jun 1951 and went for further training in the Military wing of the Armed Forces Academy for two years of further pre-commission training. He got commissioned into the Indian Air Force on 17 Jan 1953 at the age of 20 years.

He joined the flying stream of the IAF and got trained as a fighter pilot as part of 59th Pilots' course. After completing his flying training, he served with various flying squadrons located at different Air Force bases. He became a Flying Officer on 01 Jan 1955 and subsequently got further promotions to Flt Lt and Sqn Ldr. By 1965, he had put in around 12 years of service and had been promoted to the rank of Squadron Leader. By that time he had evolved into an ace fighter pilot having expertise in various air operations

During 1965, Sqn Ldr NK Malik was serving with 2 Squadron known as "Winged Arrows". The squadron was raised at Peshawar under the command of Flt Lt AB Awan. Due to the division of assets during partition after independence, the Squadron left its assets to the newly born Pakistan Air Force and was promptly number-plated in Dec 1947. No.2 Sqn was re raised again at Palam on 15 Jul 51 under the command of Sqn Ldr Randhir Singh VrC. The unit was now equipped with Spitfire XVIIIs and a Harvard trainer.  In October 1953, the unit with Sqn Ldr Rointon Engineer DFC as CO converted to the De Havilland Vampire FB52 single seater jet fighter. Another three years later in May 1956, the 'Winged Arrows' converted to the Dassault Ouragan fighter, also known as the Toofani in the IAF service. When the outbreak of the 1965 conflict was imminent, the Squadron with Wg Cdr Bharat Singh as CO was distributed among various airbases.

A detachment under Wg Cdr Bharat Singh soon moved to Halwara airbase on the flare-up of the hostilities. Another detachment was flown to Adampur while a third was maintained at Ambala under Sqn Ldr Jit Dhawan. During the war, the Squadron was tasked for not only flying escort missions to Canberra and Hunter raids, but also in close support missions in the aid of the army. Sqn Ldr NK Malik based at Ambala was part of a number of missions and played a crucial role in meeting the war time objectives of the Squadron. On 14 Sep 1965, Sqn Ldr NK Malik and Flt Lt AN Kale were scrambled to intercept two Pakistani Sabres over Amritsar. Flt Lt AN Kale found himself behind a Sabre, but his guns jammed at that moment. His aircraft got badly damaged in the air combat with Flt Lt Yusuf Ali Khan of the PAF but he managed to eject safely near Ferozepur.

Sqn Ldr NK Malik flying the other Gnat engaged the enemy Sabre being flown by Flt Lt Imtiaz Bhatti of the PAF. However in the air combat Sqn Ldr NK Malik's aircraft received several hits and he too got injured. Despite the damage, he somehow managed to reach near the IAF base, but crashed during recovery to base due to a technical malfunction. His aircraft was supposed to have suffered a 'Trim Override'. He later succumbed to his injuries and was martyred. Sqn Ldr NK Malik was a brave and committed air warrior, who laid down his life at the age of 32 years in the service of the nation.