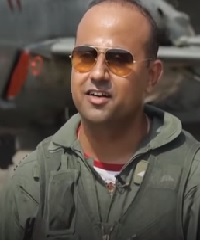 Squadron Leader Meet Kumar was fighter pilot in the IAF and was posted at the Air Force base located at Pathankot during 2018. The eldest son of Mr Pravin Kumar, Sqn Ldr Meet Kumar was serving with 26 Sqn AF during 2018 which was operating MiG-21 aircraft. He had experience in flying various types of fighter aircraft but had special liking for MiG-21. He was passionate about flying and had gained expertise in different types of air operations.

Sqn Ldr Meet Kumar was tasked for an operational sortie on 18 July 2018. It was part of the training which every fighter pilot undergoes on a regular basis to hone his flying skills and practice various maoeuvres required for operational missions. On July 18, 2018 at around 12:20 pm, Sqn Ldr Meet Kumar took off in his MiG 21 aircraft from Air Force Station Pathankot. The sortie was uneventful for the first 45 minutes but the aircraft seemed to have developed a technical snag thereafter and became uncontrollable.

The aircraft was seen circling over the fields in a village in Kangra district of Himachal Pradesh before coming down. Sqn Ldr Meet Kumar using his flying skills tried to manoevre the aircraft away from residential area of the village to minimize the loss of life and property. But eventually the aircraft crashed near Mehra Palli village in Kangra district of Himachal Pradesh, around 70 km from Dharamshala. However, Sqn Ldr Meet Kumar could not survive the crash and succumbed to his injuries. He was a committed soldier and a gallant air warrior who laid  down his life in the service of the nation.

Squadron Leader Meet Kumar is survived by his by his wife, daughter and parents.