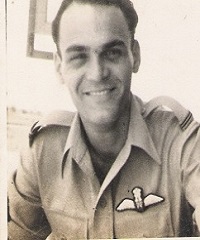 Sqn Ldr Maurice John Marston was born on 28th Nov 1932. He joined the IAF after completing his initial education as an airman. Later he got selected to be an officer and was commissioned into the Indian Air Force on 16 Jan 1954 at the age of 22 years. He joined the flying stream of the IAF and got trained as a fighter pilot as part of 62nd Pilots' course. After completing his flying training, he served with various flying squadrons located at different Air Force bases. He became a Flying Officer on 16 Jan 1955 and subsequently got further promotion to Flt Lt and Sqn Ldr.

By 1965, he had put in around 11 years of service and had been promoted to the rank of Squadron Leader. By that time he had evolved into an ace fighter pilot having expertise in various air operations. During 1965 he was serving with 108 Sqn based at Air Force base at Bagdogra.

During 1965, Sqn Ldr MJ Marston was serving with 108 Squadron known as "Hawkeyes". The squadron was initially formed at AF Station Halwara on 20 Nov 1959 with Squadron Leader Keshava Prasad Misra as its first commanding officer and was equipped with Vampire jets. The Squadron later moved across the length and breadth of the country operating from various bases like Pathankot in north, Belgaum in south, Bhuj in west to Baghdogra in east. The Squadron also took part in the liberation of Goa in the year 1961 under Squadron Leader Robert Arnold Weir as its commanding officer. During Sep 1965, Sqn Ldr MJ Marston's Sqn was operating from Air Force Station Bagdogra with Squadron Leader Robert Arnold Weir as its commanding officer.

As the Indo-Pak war commenced on 01 Sep 1965, the IAF mobilized all its assets to take on the Pak threat. Though the main offensive operations were launched on the western front, the IAF Sqns were put on high alert on the eastern front too to deal with the threat from the then East Pakistan. 108 Sqn deployed at Bagdogra AIr Base was ready to undertake operations on the eastern front and was engaged in practicing various combat air operations. On 10 Sep 1965, Sqn Ldr MJ Marston was tasked for one such operation along with Sqn Ldr Vishwanath Balkrishna Sawardekar.

As Sqn Ldr Marston and Sqn Ldr Sawardekar were about to take off in their Vampire T55 (BY-413) on the planned sortie in a jet trainer, the airfield was suddenly attacked by four Pakistani aircraft.  As a result the trainer aircraft caught fire and before they could abandon the burning aircraft, Sqn Ldr Marston's clothes caught fire. Subsequently the ammunition in the aircraft caught fire and exploded. Though Sqn Ldr Sawardekar jumped out of the burning aircraft and tried his best to rescue Sqn Ldr Marston but the exploding ammunition made the matters worse. Eventually Sqn Ldr Marston succumbed to his injuries and was martyred. Sqn Ldr M J Marston was a brave and committed air warrior, who laid down his life at the age of 33 years in the service of the nation.