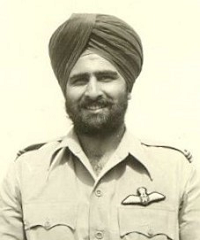 Sqn Ldr Jasbeer Singh hailed from Jalandhar district in Punjab and was born on 02 Jul 1932. He was commissioned into the Indian Air Force on 01 April 1953 at the age of 21 years. He joined the flying stream of the IAF and got trained as a fighter pilot as part of 60th Pilots' course. He became a Flying Officer on 01 Apr 1954 and subsequently got further promotions to Flt Lt and Sqn Ldr.

He also had the distinction of serving as a flying instructor at Flying Instructors School Tambaram from 01 Jan 1962 to 01 Jan 1963. Later he also got selected to attend the prestigious course (18 DSSC) at Defence Services Staff College at Wellington, a tri-service Institute for Officers’ training. By 1965, he had put in around 12 years of service and had been promoted to the rank of Squadron Leader. By that time he had evolved into an ace fighter pilot having expertise in various air operations. During 1965 he was serving with 3 Sqn based at Air Force base at Pathankot.

During 1965, Sqn Ldr Jasbeer Singh was serving with No 3 Squadron known as “Cobras” and was based at Air Force Station Pathankot. No.3 Squadron was initially raised at Peshawar on 1st October 1941, nearly six months after the raising of No.2 Squadron under the command of Squadron Leader NAN Bray. In 1965, the Squadron was operating Mystere IVa aircraft under the command of Wing Commander Paul Cecil Roby. In 1965, as fighting flared up in the Chhamb sector on 01 Sep, the squadron was called upon to carry out its first offensive sorties on 01 Sep itself, when numerous sorties were flown against 'Targets of Opportunity' in support of the Indian army's offensive across the International border.

On the evening of 1 September, No. 3, along with Squadron No. 31, flew 16 sorties in 45 minutes against Pakistani Armour at Chhamb. A change of command occurred midway, as Wg Cdr S Bhattacharya took over from Paul Robey, who had fallen sick. No. 3 Sqn continued interdiction and close air support (CAS) missions throughout the war. Sqn Ldr Jasbeer Singh was part of many missions and played a crucial role in meeting the war time objectives of the Squadron. On 05 Sep 1965, when the Mysteres of 3 Sqn were taxiing to the pens at Pathankot airbase after a raid on enemy, eight PAF F-86s swooped down to carry a raid on Pathankot. A number of aircraft belonging to 3 Sqn and 31 Sqn were lost in that raid. In retaliation, an attack on the Pakistani airfields and other important installations was planned.

On 7th Sep, Sqn Ldr Jasbeer Singh was tasked to lead a strike mission against a high powered Pakistani radar unit near the Gujranwala airfield, which was greatly hampering our air operations. He was leading a 3 aircraft mission with Flt Lt Doraiswami and Flt Lt Boman Irani as his combat team members. As his formation was about to attack, Sqn Ldr Jasbeer Singh observed four enemy Sabre jets approaching. He immediately warned the formation and undaunted by the interception by the enemy aircraft and the intense ground fire, he pressed home his attack and inflicted severe damage on the radar Station. In his final attack, when he had to approach the target very low, his aircraft was hit by ground fire and was seen crashing near the target. Sqn Ldr Jasbeer Singh could not survive and was martyred. Sqn Ldr Jasbeer Singh was a brave and committed air warrior, who laid down his life at the age of 33 years in the service of the nation.

The Citation for the Vir Chakra awarded to him reads :

Squadron Leader Jasbeer Singh was serving as a Flight Commander in a fighter squadron operating in the western sector during the operations against Pakistan.

On 7th September, 1965, Squadron Leader Jasbeer Singh was detailed as the leader of a strike mission against a high-powered Pakistani radar unit near the Gujranwala airfield, which was greatly hampering our air operations. As his formation was about to attack, Squadron Leader Jasbeer Singh observed four enemy Sabre jets approaching. He immediately warned the formation and undaunted by the interception by the enemy aircraft of superior performance and the intense ground fire, he pressed home his attack and inflicted severe damage on the radar Station. In his final attack, when he had to approach the target very low, his aircraft was hit by ground fire and was seen crashing near the target. In this action, Squadron Leader Jasbeer Singh displayed great valour and unflinching devotion to duty, which were in the finest traditions of the Air Force.