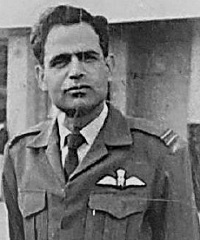 Sqn Ldr Jatinder Das Kumar hailed from Faridkot in Punjab and was born on 30 Nov 1933. He was commissioned into the IAF as a pilot officer on on 16th April 1955 at the age of 21 years. He was selected for the flying branch in the IAF and was trained as a fighter pilot as part of 65th Pilots' course.

After completing his flying training, he served with various flying squadrons located at different Air Force bases. After serving for a couple of years he got married to Ms Satish Kumar on 21 November 1962. By 1971, he had put in about 16 years of service and had risen to the rank of Squadron Leader. By that time he had evolved into an ace fighter pilot having expertise in various air operations. During 1971, Sqn Ldr JD Kumar was serving with the 3 Squadron based at Air Force Station Hindon and was operating Mystere IVA aircraft.

During Dec 1971, Sqn Ldr J D Kumar was serving with No 3 Squadron of the IAF based at Hindon. The Squadron was operating Mystere IVA aircraft and was known as :Cobras". No.3 Squadron Air Force was initially raised at Peshawar on 1st October 1941, nearly six months after the raising of No.2 Squadron. The unit was assigned a Fighter Recce role under the command of an RAF officer, Sqn Ldr NAN Bray DFC. During the 1965 war the squadron operated from Pathankot with Wing Commander Paul Cecil Roby as its commanding officer. The Squadron remained at Pathankot at the end of the 65 War. Wg Cdr Bhattacharya was in command till 67, when Wg Cdr Kurane took over. Wg Cdr RN Dogra assumed the CO's mantle in July 71, and the Squadron moved to Hindon by the end of the month, bringing to an end an eight year stay at Pathankot. In November 71, as war clouds gathered, one flight of the Mysteres was flown to Air Force base at Nal along with Mysteres of No.31 Squadron. The other flight remained at Hindon In the beginning of the war.

In response to the preemptive strikes by the Pakistan Air Force on Indian Air bases on 03 Dec 1971, the IAF launched operations against the Pak Air Force. As part of the IAF operations, 3 Sqn took part in numerous missions against Pakistani targets. The Squadron undertook first operational missions on 05th Dec which were interdiction missions in the Christian Mandi area. Subsequently, the Squadron launched a number of missions against armour concentrations and ammunition dumps in the Haveli Pattan and Fazilka Suleimanke area. Sqn Ldr J D Kumar was part of many missions during this period.

Sqn Ldr J D Kumar’s Aircraft was hit on the starboard wing and started trailing heavy smoke. Fg Off HS Kang gave warning about it to Sqn Ldr J D Kumar who then turned towards the Indian border. However the damage to the Aircraft was very severe and it exploded within a short time. He was seen ejecting from the aircraft but his whereabouts could not be known thereafter. He is presumed to have been taken over as a POW (Prisoner of War). However, successive regimes in Pakistan have denied the existence of Indian POWs in its jails. Presently, Sqn Ldr J D Kumar’s name features on the official list of the ’54 Personnel Missing in Action’, tabled in the Lok Sabha in 1979 by the then Minister of State of External Affairs Shri Samarendra Kundu.