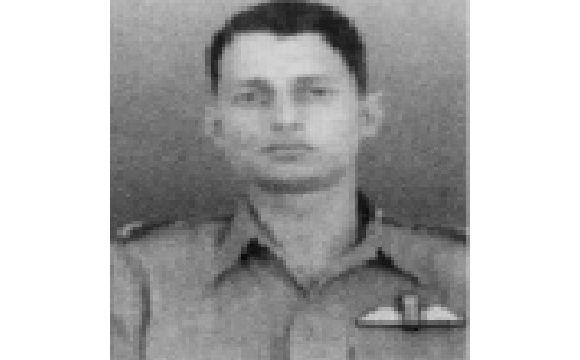 Sqn Ldr Deba Prasad Chatterjee hailed from West Bengal and was born on 15 Aug 1929. He was commissioned into the Indian Air Force on 17 Jan 1953 at the age of 23 years. He joined the flying stream of the IAF and got trained as a fighter pilot as part of 59th Pilots' course. After completing his flying training, he served with various flying squadrons located at different Air Force bases. He became a flying office on 17 Jan 1954 and served with 10 Squadron based at Palam till 1958.

By 1965, he had put in around 12 years of service and had been promoted to the rank of Squadron Leader. By that he had evolved into an ace fighter pilot having expertise in various air operations. During 1965 he was serving with 20 Sqn based at Palam.

During 1965, Sqn Ldr DP Chatterjee was serving with 20 Sqn, known as “Lightenings” and was based at Air Force Station Palam. However as the war with Pakistan became imminent, he was sent on deputation to 7 Sqn based at Halwara. No.7 Squadron was formed on 01st December 1942 at Vizagapatnam under the command of Sqn Ldr Hem Chaudhuri. In 1965, the Squadron known as "Battle Axes" was operating flying Hawker Siddeley Hunter fighter-bombers. In 1965, as fighting flared up in the Chamb sector on 1 Sep, the squadron was called upon to carry out its first offensive sorties on the morning of 6th Sept, when numerous sorties were flown against 'Targets of Opportunity' in support of the Indian army's offensive across the International border. Hunters of different squadrons were clubbed together at Halwara and missions flown consisting of mixed formations. The 7 Sqn Hunters were joined by about a flight of Hunters from No.20 Squadron from Palam. Sqn Ldr DP Chatterjee was tasked for an operational mission on 20 Sep 1965.

It was a four aircraft mission with Sqn Ldr DP Chatterjee and Flt Lt  SK Sharma flying Hunters and Flt Lt  Kamal Khanna and Flt Lt  AK Mazumdar flying Gnats. The TOT(Time over Target) given to the pilots was around midday as the enemy defences were expected to be at a low key at that time. However around the same time four Pakistani Sabres took off from Sargodha airfield to patrol the airspace above Lahore. Sqn Ldr Chatterjee took off in his Hunter F-56 as planned along with other aircraft and reached over Lahore. The enemy Sabres first spotted Hunters and engaged them in combat. In the ensuing air combat both Hunter aircraft got hit and suffered damage. Flt Lt  SK Sharma however managed to bring his aircraft back, but the damage to the aircraft of Sqn Ldr Chatterjee was severe and eventually it crashed in the enemy territory.

Sqn Ldr DP Chatterjee is presumed to have been taken over as a POW (Prisoner of War). However, successive regimes in Pakistan have denied the existence of Indian POWs in its jails. Presently, Sqn Ldr DP Chatterjee's name features on the official list of the ’54 Personnel Missing in Action’, tabled in the Lok Sabha in 1979 by the then Minister of State of External Affairs Shri Samarendra Kundu.