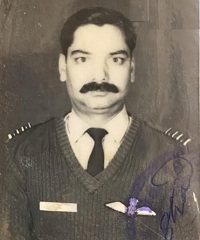 Sqn Ldr Bhanu Pratap Pachauri hailed from Uttar Pradesh and was born on 31 July 1956. Son of Shri Shyam Lal Pachauri and Smt Shanti Devi Pachauri, he came from a humble family of teachers. He was undergoing his schooling in Etah in Uttar Pradesh, when the family decided to fall back to their ancestral roots in the village. Looking at his dreams of doing something big, Sqn Ldr Pachauri was left in care of his uncles to continue his studies in the town. He had to change towns to complete his schooling as Etah had schools only till 10th standard. He completed his B.Sc and pursued his dream of joining the Air Force. Consequently he realized his dream and joined the Air Force Academy in 1979. He was originally a part of No 123 Pilots’ course, however due to a fracture eventually graduated from elementary flying school in Bidar as a part of No 124 Pilots’ course.

Commissioned as a fighter pilot in the Indian Air Force, in 1980 he got posted to the Air Force base at Hasimara to fly the mighty Hunters in OCU(Operational Conversion Unit). He had just completed his conversion and got posted to his first fighter Sqn (27 Sqn AF) when he went on leave as a bachelor and returned a married man in 1981. Later he converted to the coveted MiG-21 Bis in the year 1984. He flew as a part of 32 Sqn as well as 23 Sqn before being selected to undergo the Fighter Combat Leaders’ course. Having graduated as an FCL(Fighter Combat Leader), he continued to serve in 23 Sqn before moving to the prestigious DSSC (Defence Services Staff College) Wellington for the staff course. From DSSC he was posted to 26 Sqn as a senior supervisor and then subsequently took over as Flight Commander in the year 1993.

Besides being an ace fighter pilot, Sqn Ldr Pachauri had keen interest in music and arts. He was also an avid reader with wide interest in non fiction genre. A fine officer and a thorough gentlemen, he was loved by all for being a good human being. A jovial and progressive individual, he commanded great respect among his family and friends.

During 1994, Sqn Ldr Pachauri was serving with 26 Sqn AF located at Air Fore base Pathankot in Punjab. By 1994, Sqn Ldr Pachauri  had put in around 14 years of service and evolved into a professionally competent fighter pilot with substantial experience in various air operations. He had accumulated over 1900 hours of fighter flying experience and had flown various aircraft including Hunter, MiG-21 (T-75) and MiG-21 (T-96) aircraft. He was functioning as a Flight Commander of the Squadron and took keen interest in grooming the young pilots joining the unit. Besides ensuring completion of the operational task of the unit, Sqn Ldr Pachauri would often undertake air sorties with the young pilots in trainer aircraft to enhance their expertise in complex air operations. Sqn Ldr Pachauri undertook one such training mission on 19 July 1994 with his unit pilot Fg Offr Sumit Malhotra.

Sqn Ldr Pachauri and Fg Offr Sumit Malhotra carried out the pre-flight checks as per the SOP and took off in a MiG-21 trainer as per the flying plan on 19 July 1994. The flight was uneventful for sometime but later they lost contact with the ATC (Air Traffic Control) and their aircraft crashed in the hill ranges close to Pathankot near the J&K, Punjab and Himachal Border. Sqn Ldr Pachauri and Fg Offr Sumit Malhotra could not survive the crash and lost their lives in this tragic accident. Sqn Ldr Pachauri was a professionally competent fighter pilot and a committed air warrior who laid down his life in the line of his duty.