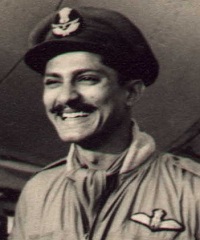 Sqn Ldr Ayappan Sudhakaran hailed from Chennai in Tamil Nadu and was born on 16 Sep 1927. Son of Shri VK Ayappan Pillai, Sqn Ldr Ayappan followed his childhood dream of becoming a fighter pilot in the Air Force and joined NDA after his schooling. He was commissioned into the Indian Air Force on 14th Oct 1950 at the age of 23 years. He joined the flying stream of the IAF and got trained as a fighter pilot as part of 53rd Pilots' course.

After his initial flying training was posted to various Air Force bases and gained experience in flying different types of aircraft. He got promoted to the rank of Flight Lieutenant on 14 Oct 1955. He then got trained as a test pilot at Empire Test Pilots School, UK in the year 1956.  By 1960, Sqn Ldr Sudhakaran had completed around 10 years of service in the Air Force and evolved into a professionally competent pilot having expertise in various types of air operations.

The citation of Kirti Chakra awarded to him reads:-

On the 4th of June, 1960, Suqadron Leader Ayappan Sudhakaran was carrying out a test flight in a Gnat aircraft the only one of its kind in India which was fully instrumented when the engine flamed out at low altitude. He could have abandoned the aircraft and saved his own life but decided to save the aircraft by attempting a forced-landing. In this gallant attempt he lost his life.

Squadron Leader Ayappan Sudhakaran had been a test pilot for nearly three years at Kanpur during which period he made numerous test flights in which he faced great risk to his life and displayed outstanding flying ability and technical knowledge of a very high order. In this incident in which he lost his life he showed courage, devotion to duty and determination in the highest traditions of the Air Force.