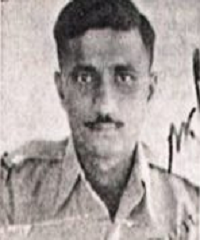 Squadron Leader Ajjamada Boppayya Devayya was born on 24 December 1932, at Coorg, Karnataka. His father Bopayya was a doctor in Kodagu district of Karnataka. On Dec 6, 1954, he was commissioned into the Indian Air Force as a fighter pilot. He was posted to No.1 “Tigers” Squadron and flew the Mystere IV a fighter bomber aircraft of the IAF. During the outbreak of the 1965 war, Sqn Ldr Devayya was serving as an instructor at the Air Force Flying College.

On 07 Sep 1965, the IAF as part of ongoing efforts to neutralize the air assets of the PAF planned an air strike on its air base at Sargodha. Sqn Ldr Devayya was part of that aircraft strike mission that went to Sargodha airfield in Pakistan. Despite actually being a standby in case one of the first 12 aircraft dropped out, he joined the air battle. Sqn Ldr Devayya was intercepted by an enemy F-104 Star-fighter flown by Pakistani pilot Flt Lt Amjad Hussain. Sqn Ldr Devayya had experience as a flying instructor and was adept at various air operations. Utilizing his superior flying skills, Sqn Ldr Devayya successfully evaded the Starfighter’s attacks, but the enemy aircraft caught up with him and damaged his plane by attacking it with its machine guns.

Despite flying a damaged aircraft, Sqn Ldr Devayya in a rare display of courage and daredevilry attacked the enemy Star-fighter and damaged it severely. The Star-fighter lost control and crashed while the pilot Flt Lt Hussain ejected from his aircraft. However, the fate of Sqn Ldr Devayya could not be known as his aircraft crashed inside the enemy territory. From a British writer John Fricker’s work who was appointed by Pakistan to write about the war, the IAF came to know about the true account and in 1988 announced that the “Maha Vir Chakra” was to be awarded to Sqn Ldr Devayya posthumously. He became the first IAF officer to receive “Maha Vir Chakra” posthumously.  So far  21 IAF personnel (including two Canberra pilots Wg Cdr Jag Mohan Nath and late Wg Cdr Padmanabha Gautham who have the distinction of receiving the bar to the Maha Vir Chakra) have received the “Maha Vir Chakra” in four wars and numerous actions since 1947.

Mrs Devayya accepted the “Maha Vir Chakra” awarded to her husband in 1988, nearly 23 years after the war.

The citation for the Maha Vir Chakra  awarded to him reads:

Squadron Leader Ajjamada Bopayya Devayya (4810) flew as a member of a strike formation that was assigned the task of attacking the heavily defended Sargodha airfield at 0555 hrs on 07 Sep 65. All members of the mission except for Squadron Leader Devayya returned safely to base.

For this exceptional act of conspicuous gallantry in the face of the enemy and the fighting spirit displayed under overwhelming odds and at the cost of his own life, Squadron Leader Ajjamada Bopayya Devayya is awarded Maha Vir Chakra, posthumously.

On September 7, 2009, the private bus stand circle in Madikeri in Kodagu district of Karnataka was named after Sqn Ldr Devayya in his honour.