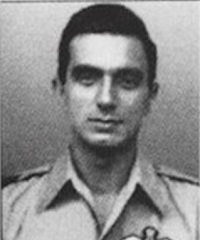 Sqn Ldr Ajit Kumar Rawlley was born on 16th Nov 1934 in a well known Rawlley family. He was commissioned into the Indian Air Force on 17 Jul 1954 at the age of 20 years. He joined the flying stream of the IAF and got trained as a fighter pilot as part of 63rd Pilots' course. After completing his flying training, he served with various flying squadrons located at different Air Force bases. He became a Flying Officer on 17 Jul 1954 and subsequently got further promotions to Flt Lt and Sqn Ldr.

By 1965, he had put in around 11 years of service and had been promoted to the rank of Squadron Leader. By that time he had evolved into an ace fighter pilot having expertise in various air operations. During 1965 he was serving with 7 Sqn based at Air Force base at Halwara.

During 1965, Sqn Ldr AK Rawlley was serving with No. 7 Squadron, flying Hawker Siddeley Hunter fighter-bombers. The squadron had a long operational history stretching back to the Burma Campaign of World War II. No.7 Squadron was formed on 01st December 1942 at Vizagapatnam under the command of Sqn Ldr Hem Chaudhuri. In early 1961, 7 Squadron equipped with Hunters was based at Palam airbase in New Delhi. In 1965, the Squadron known as "Battle Axes" was operating flying Hawker Siddeley Hunter fighter-bombers and was based at Halwara in Punjab. In 1965, as fighting flared up in the Chamb sector on 1 Sep, the Squadron was called upon to carry out its first offensive sorties on the morning of 6th Sept, when numerous sorties were flown against 'Targets of Opportunity' in support of the Indian army's offensive across the International border. Hunters of different squadrons were clubbed together at Halwara and missions flown consisting of mixed formations. Sqn Ldr AK Rawlley was part of a number of missions and played a crucial role in meeting the war time objectives of the Squadron.

As part of continuing air offensive, 7 Squadron was entrusted to attack the highly fortified Sargodha air base of Pakistan Air Force. Sargodha airbase located west of Lahore hosted the headquarters of the Central Air Command, one of the three combatant air commands of the PAF. The base was the hub of PAF effort during the war. On 6th Sept the IAF mounted 33 sorties against the heavily guarded PAF complex at Sargodha. The commanding officer of the 7 Squadron, Wg Cdr OP Taneja decided to launch a wave of sorties on 6th September. Sqn Ldr AK Rawlley was tasked for one such mission on 06 Sep 1965.

In the evening of 06 Sep 1965, one such mission took off from Halwara air base, which was a 4-Hunter formation led by Wg Cdr T Zachariah. The other pilots included Sqn Ldr MM Sinha, Flt Lt SK Sharma and Sqn Ldr AK Rawlley. On that day four F-86 Sabres, under Sqn Ldr MM Alam of the PAF were launched to attack Adampur air base but they missed it and overshot. Later they spotted three Dakotas (led by Sqn Ldr Dhillon of 43 Squadron flying from Sarsawa to Amritsar) near Phagwara in Punjab but let them go. But the PAF mission ran into Sqn Ldr AK Rawlley's mission near Tarn Taran and engaged into an air combat. Sqn Ldr AK Rawlley and his comrades displaying great courage and air combat skills engaged the enemy aircraft and successfully thwarted their mission.  However during the combat the manoeuvres, Sqn Ldr Rawlley's aircraft hit the ground and exploded. Sqn Ldr AK Rawlley could not survive the crash and was martyred. Sqn Ldr Ajit Kumar Rawlley was a brave and committed air warrior, who laid down his life at the age of 31 years in the service of the nation.