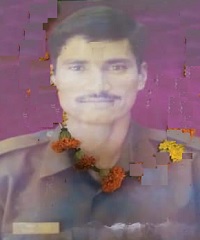 Sowar Sohan Singh Solanki hailed from Mahoo Khas village in Hindaun tehsil of Karauli district in Rajasthan and was born on 25 Jul 1974. Son of Shri Ratan Singh Solanki and Smt Janani Devi, Sowar Sohan Singh joined the Army after his initial schooling on 28 April 1994 at he age of 19 years. He was recruited into 20 Lancers of the Armoured Corps, the combat arm of the Indian Army, well known for its potent battle tanks. After serving for some time with his parent unit he was deputed to serve with 4 Rashtriya Rifles deployed in J & K area for counter insurgency operations.

During Aug 1999, Swr Sohan Singh was serving with 4 RR battalion, deployed in Kupwara district of J&K. Though, the Kargil war had ended on 26 July 1999, the situation along the LOC was tense during Aug 1999, and the troops were on alert for any eventualities. Also during that period a substantial number of army personnel were deployed at Anantnag as part of the security cover for Amarnath Yatra. The Kupwara town was left under the CRPF and the militants saw this as an opportune moment to attack the Army camp of 4 RR unit. Thus in a pre-planned move, at around 1:15 am on 06 Aug 1999, the Army camp of 4 RR unit in village Chak Nutnusa in Kupwara district was attacked by a group of heavily armed militants.