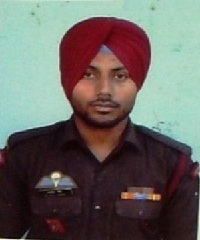 Sowar Makhan Singh after completing his education he joined the Indian Army, after his training he was recruited to Armoured Corps Regiment.

Sowar Makhan Singh displayed courage and determination while fighting the terrorists and made the supreme sacrifice in the best tradition of the Indian Army. For his ultimate patriotism, he is remembered and saluted. Sowar Makhan Singh was awarded the nation’s second highest peacetime gallantry award, “Kirti Chakra” for his outstanding courage, leadership and supreme sacrifice.

The Citation to the Award Shaurya Chakra reads him to:

Sowar Makhan Singh was the leading scout of Bravo Company Commander’s Quick Reaction team. On 9th April 2002, the team was on a search and destroy operation in the dense jungle in Gutlibagh Forest in Jammu & Kashmir.

At about 0900 hours Sowar Makhan Singh reached a rocky cliff face. Due to his alertness he noticed two terrorists below the cliff. Immediately the terrorists opened fire and started to flee. On seeing this Sowar Makhan Singh jumped down the Cliff, physically blocking their escape and charged at the nearest terrorist and killed him. He then came under a hail of bullets from the second terrorist due to which he was injured in the neck and hand his rifile was rendered useless. Undeterred he jumped on the second terrorist, snatched his rifile and killed him in a fierce hand to hand tussle. The gallnat soldier later attained martyrdom during evacuation.

Sowar Makhan Singh displayed raw courage and exemplary bravery while fighting the terrorists and made the supreme sacrifice in the best tradition of Indian Army.