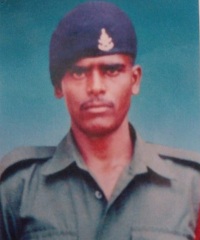 Signalman Eknath Khairnar Chaitram was born on 1st Jun 1968 and hailed from Devghat village in Malegaon tehsil of Nashik district in Maharashtra. After completing his school education, Sigmn Eknath Khairnar joined the army on 22nd Feb 1991 at the age of 22 years. He was recruited into the Corps of Signals, an arm of the Indian army which takes care of its military communications.

After serving for a couple of years, Sigmn Eknath Khairnar got married to Ms. Rekha on 18th March 1995 and the couple had a son Goverdhan on 26th Nov 1998.

The objective assigned to the attacking troops in the Drass sector was heavily defended by the enemy. The enemy suspecting an attack by Indian forces resorted to heavy artillery shelling. However, despite enemy shelling the infantry troops continued their advance towards the given objective. Sigmn Eknath Khairnar tasked to provide the crucial communication links with the attacking forces also moved along with the infantry soldiers. As the soldiers were slowly inching towards the objective Sigmn Eknath Khairnar sustained a splinted injury due to heavy enemy artillery shelling. He later succumbed to his injuries and was martyred. Sigmn Eknath Khairnar was a dedicated and brave soldier who laid down his life in the service of the nation. He was given the gallantry award, “Sena Medal” for his great courage, devotion to duty and supreme sacrifice.