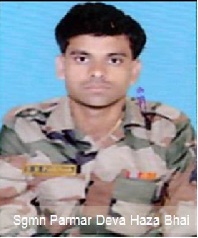 Signalman Parmar Deva Haza, a native of Karmadiya village of Bhavnagar district in Gujarat, was the son of Sri Deva Parmar, a cattle herder by profession. He  joined the army in the year 2010 at the age of 20 years and was recruited into the Corps of Signals. After serving for a couple of years with different units Signalman Parmar was later deputed to serve with 56 Rashtriya Rifles unit in J & K area.

During 2017, Signalman Parmar’s unit was deployed in Machil sector along the LOC. There was heavy snowfall in J & K area in Jan 2017 , resulting in multiple avalanches in Jammu and Kashmir. The Chandigarh based Snow and Avalanche Study Establishment had warned of avalanches in Jammu and Kashmir and Himachal Pradesh in the last week of Jan 2017. The first avalanche hit Gurez on 25 of January morning, in which a family of four civilians had died. The second took place around the same time in Sonmarg, chiefly a tourist area, where an army camp was located.

The avalanche at Sonmarg hit the Army camp of 115 Battalion at about 5:45 AM in central Kashmir’s Ganderbal district. The avalanche struck two shelters occupied by two officers and four jawans. The soldiers got buried under tonnes of ice. A total of 15 soldiers lost their lives in the avalanches on 25 Jan 2017. After three days on 28 Jan 2017, another avalanche struck Machil sector in the north of Kashmir. Signalman Parmar Deva Haza was one of the 5 soldiers of 56 RR unit, who were part of a patrol party, and had been trapped in snow for more than four hours after the track they were traveling in caved-in in Machil sector on 28 Jan 2017. They were rescued by the specially-equipped Avalanche Rescue Teams (ARTs) in a day-long operation. However, they could not be airlifted for medical treatment for two days as no helicopter sorties could take place due to inclement weather, foggy conditions and persistent snowfall. The Army aviation pilots made several attempts to land and evacuate the five soldiers for specialized treatment.

Machil, on the LoC in north Kashmir, had received snowfall as high as six feet at some places, blocking its road link with Srinagar, 160km away. The soldiers were in critical condition when they were rescued and were treated by the doctors in Machil. However the soldiers’ condition continued to deteriorate, and by the time they were airlifted to Srinagar army base hospital on 30 Jan 17, it was too late for the doctors to save the lives of the five brave hearts. Besides Signalman Parmar Deva Haza the other valiant soldiers included Sep Dhavale Ganesh Kisan, Sep Balaji Bhagwanrao Ambore, Gnr Thamothara Kannan and Naik Mane Ramchandra Shamrao. Signalman Parmar Deva Haza was a valiant and committed soldier who laid down his life in the service of the nation.

Signalman Parmar Deva Haza is survived by his parents and wife Smt Gauri.