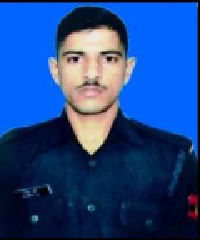 Place of Birth: Chandauli, (UP)

Signalman Chandan Kumar Rai hailed from Nadesar village in Uttar Pradesh’s Chandauli district. Son of Shri Satya Prakash Rai and Smt Leelavati Rai, Signalman Chandan Kumar joined the Army after completing his school education. He was recruited into the Corps of Signals, the arm which provides military communication to the Army during peace as well as war. After serving for some time with his parent unit, he was deputed to serve with 37 RR battalion deployed in J&K for counter-insurgency operations.

On the 19th of January Signalman Chandan Kumar Rai’s unit was deployed at a forward post in the Mankote sector of Poonch district. From 18th January Pakistani Army had initiated unprovoked and indiscriminate firing of mortars, small arms, and automatics in the Mendhar sector along the Line of Control. Pakistan activated the entire IB and LoC, extended its shelling to newer areas targeting civilians and Indian forward posts in the next two days. Three civilians were killed when Pakistan shelled civilian areas in RS Pura and Kanachak in the firing.

Pakistan used heavy-caliber long-range weapons including 120 mm mortars, with a range of seven kilometers, and 82 mm mortars, having a range of 4.5 kilometers, to inflict maximum damage deep into the civilian areas. In Jammu district, over 1.27 lakh people in 81 villages were affected by the border shelling and 41,000 moved to safer places. In the shelling that started on January 18, mostly Arnia, RS Pura, and Suchetgarh areas were affected. On January 19, the shelling spread to Samba and Kathua districts. The following day, Marh area also witnessed heavy shelling. In total, 12 people including 2 BSF personnel, 3 army soldiers, 7 civilians died in this horrific violation of the ceasefire. The Indian Amy retaliated to the unprovoked firing in a befitting manner resulting in heavy exchange of fire lasting several days intermittently.