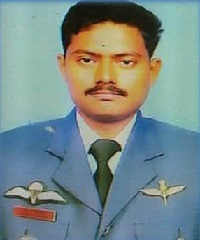 Sergeant Khairnar Milind Kishore was born on 17th February 1984 in Sakri village in Nashik district of Maharashtra. Son of Shri kishore Khairnar and Smt Sunanda kishore Khairnar. He joined the Indian Air Force in 2002 and later was selected to be a part of the elite Guard force. Established in 2003, the Air Commandos of Garud is one of the newest Special Operations Forces (SOF) units within the Indian armed forces. The need for a dedicated force was felt when militants attacked two air bases in Jammu and Kashmir in 2001.

The first batch of Garud commandos came into being on February 6, 2004. It was established with the intention of providing a versatile military capability specific to the requirements of the IAF. One of their main responsibilities during peacetime is defending IAF’s airfields. Sgt Kishore was undergoing advanced training with the army for anti-insurgency operations since the beginning of 2017.

Sgt Khairnar Milind Kishore from 617 Garud Flight from the IAF was part of the Guard team that was undergoing advanced training with the army for anti-insurgency operations in J & K since the beginning of 2017. The security forces had received credible information from the intelligence sources about the presence of militants in Hajin area in Bandipora district. It was decided to launch a joint operation by 13 RR unit and Garud team to take on the terrorists.

The joint team swung into action and launched the combined Cordon and Search Operation in Hajin Village. Sgt Khairnar Milind Kishore was part of the 14-member Garud squad which was accompanying a team of the 13 Rashtriya Rifle. The joint team laid a cordon around the house at 0400 hrs. On being cornered and threatened the terrorists ran out of the house lobbing grenades and firing indiscriminately towards the cordon party. Two terrorists, firing indiscriminately ran towards the Garud commandos, who challenged them and killed two terrorists.

During the intense exchange of fire, Sgt Khairnar Milind Kishore sustained serious multiple bullet injuries and was evacuated to Base Hospital, Srinagar where he succumbed to his injuries and was martyred.