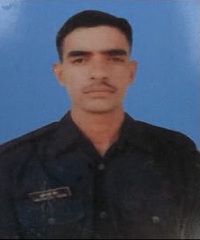 Sepoy Vrahma Pal Singh was born on 10th July 1987  in the village of Shaujana Rani located in Bulandshahar district of Uttar Pradesh. Sep Vrahma Pal Singh, after completing his initial studies, had joined the army in the year of 2004. He was recruited into the famed Rajput Regiment, a regiment known for its fearless soldiers and numerous battle exploits.

By 2017, Sep Vrahma Pal Singh had served for almost 13 years and had served in various operational areas with challenging terrain and work environments. After serving for few years with his parent unit he was later deputed to 44 Rashtriya Rifles deployed for counter insurgency operations in J & K.

During 2017, Sep Vrahma Pal Singh’s unit 44 RR battalion was deployed in Pulwama district of J & K and engaged in operations against the militants on a frequent basis. In the first week of Nov 2017, the security forces received information from the intelligence sources about the presence of some hard core militants in Algar village of Pulwama district, falling in the AOR(Area of responsibility) of 44 RR. Based on the assessment of the available information 44 RR planned a cordon and search operation under the leadership of Capt Kaninder Paul Singh. On 06 Nov 2017, as planned the team that included Sep Vrahma Pal Singh, reached the suspected area and launched the operation.

In the cordon and search operation (CASO),  Sep Vrahma Pal Singh was deployed in the inner cordon. Having cleared two houses Sep Vrahma Pal Singh along with his buddy moved ahead to clear the adjacent cowshed. In a single-handed gallant action, he provided cover fire, thus giving an opportunity to his buddy Rifleman Aurangzeb to extricate himself not only out of cowshed but also kept the three terrorists engaged thus prevented their escape out of cowshed. This also resulted in gaining of time to readjust the cordon by the team leader Capt Kaninder Paul Singh. In the ensuing firefight, Sep Vrahma Pal Singh sustained bullet injuries on his chest and legs. Despite being grievously wounded and numerically overwhelmed by terrorists Sep Vrahma Pal Singh continued dominating and engaging the terrorists, which led to neutralization of one terrorist and injuring of another.

During the operation, three militants, including a self-styled Divisional Commander of Jaish-e-Mohammad outfit were killed. However during the heavy exchange of fire Sep Vrahma Pal Singh got seriously injured and later succumbed to his injuries. Sep Vrahma Pal Singh showed outstanding valour,unyielding fighting spirit and devotion to duty and made the supreme sacrifice in the service of the nation. Sep Vrahma Pal Singh was given the nation’s second highest peace time gallantry award, “Kirti Chakra” for his gallantry , dogged determination and sacrifice in the highest traditions of the Indian Army.

Sep Vrahma Pal Singh is survived by his wife Sangeeta Rani, two daughters and a son.