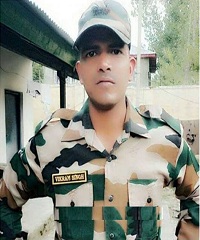 Sepoy Vikram Singh hailed from Ladpur village in Chata Tehsil of Mathura district in Uttar Pradesh. After completing his education, Sep Vikram Singh joined the  Army in 2013 at the age of 20 years. After serving for few years , he was later deputed to serve with 50 Rashtriya Rifles battalion , deployed in J & K for counter insurgency operations.

During 2018, Sep Vikram Singh’s unit was deployed in Pulwama district of south Kashmir. It was located in Kakapore Army camp in Pulwama district , a sensitive area infested with militants. On 27 May 2018, a group of hard core militants equipped with automatic weapons attacked the Army camp with an intention to cause maximum casualties. It was a pre-planned and dastardly act but the troops of 50 RR rose to the occasion and swung into retaliatory action. A fierce gun battle ensued  thereafter lasting for several hours.

During the heavy exchange of fire Sep Vikram Singh got severely injured and was evacuated to 92 Base Hospital in Srinagar. However he later succumbed to his injuries and was martyred. Sep Vikram Singh was a valiant and dedicated soldier who laid down his life in the service of the nation.

Sepoy Vikram Singh is survived by his wife.