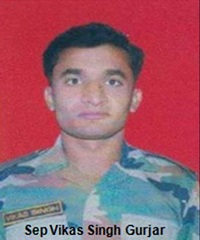 Sepoy Vikas Singh Gurjar was born on 1st July 1991 in Andhiyakhera village of Karauli district in Rajasthan. Son of Shri Mohan Singh Gurjar and Smt Ramniri Devi. Sepoy Vikas Singh joined the Army after completing his initial education in 2010, at the age of 19 years. He was recruited into the 23 Rajput of the Rajput Regiment, an infantry regiment well known for its gallant soldiers. After serving for few years with his parent unit, Sepoy Vikas Singh Gurjar was deputed to serve with 44 Rashtriya Rifles battalion, deployed in J & K for counter-insurgency operations.

Sepoy Vikas Singh got married to Ms Ramraji and the couple had two daughters. Ironically his wife was eight months pregnant with their third child when Sepoy Vikas Singh made the supreme sacrifice.

During Feb 2017, Sepoy Vikas Singh Gurjar’s unit was deployed in Shopian district of J & K and was engaged in operations against the militants on a regular basis. The unit had to maintain a high state of alert at all times with soldiers ready to undertake operations at very short notice. On 22 Feb 2017, the security forces had received specific information about the presence of some hardcore militants in Kungoo village in Shopian district of J & K. A decision was taken to launch a joint operation with elements of 44 RR and J & K Police SOG (Special Operation Group) on the night of 22/23 Feb 2017 to flush out the militants. As planned the joint assault team reached the suspected area in Kungoo village on the night of 22/23 Feb 2017 and launched the cordon and search operation. Sepoy Vikas Singh Gurjar was part of the assault team comprising other soldiers of 44 RR battalion and J & K Police.

However, the militants probably had been tipped off and could not be found in the village. The team consequently decided to return to the unit but when the team had reached Mulu Chitragam along the way, militants belonging to Hizb-ul-Mujahideen attacked the team. The militants launched the attack by firing indiscriminately at the convoy, leaving seven soldiers injured, including two officers. Though the attack was sudden, the troops quickly reorganized themselves and retaliated forcefully. However, during the heavy exchange of fire, several soldiers got injured. The injured soldiers were shifted to the Army Hospital, but three soldiers including Sepoy Vikas Singh Gurjar, Sapper Sreejith, and Lance Naik Ghulam Mohiuddin Rather later succumbed to their injuries. Sepoy Vikas Singh Gurjar was a brave and committed soldier, who laid down his life in the service of the nation following the highest traditions of the Indian Army.