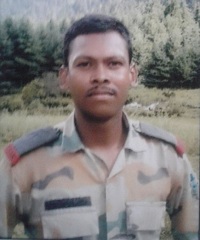 Sepoy Vikas Janrao Uike (26) was resident of Village Nandgaon in Maharashtra’s Amravati district. He belonged to 6 Bihar Regiment and was among the 19 brave hearts who laid down their lives in the line of duty in September 2016 when Pakistani terrorists struck the Army’s Administrative base in Uri sector of J & K.

His father also served in the army and had retired in  October 2015  after 34 years with the armored division. Sepoy Vikas Janrao Uike served for six years in the Indian Army. And he is survived by his parents, younger brother and younger sister.