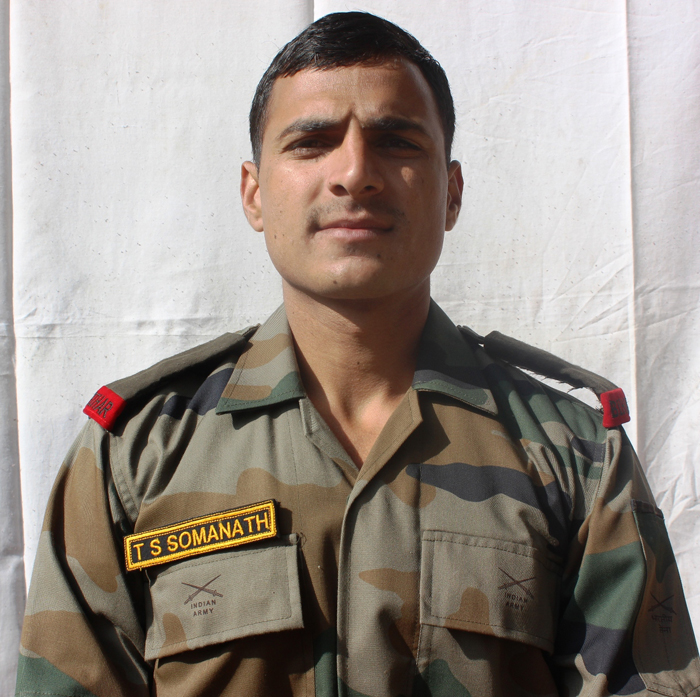 Sepoy TS Somnath, a native of Khadangali village in Nashik district of Maharashtra, belonged to the 6 Bihar regiment of Indian Army. He always wanted to serve in the Army ever since he was a child and he worked at it to achieve his dream. Sepoy TS Somnath was the youngest of four siblings, including two married sisters.

Sepoy Somnath had served in Bihar and West Bengal and was also part of a contingent sent to Bhutan. He had joined his unit deployed at Jammu and Kashmir barely two-and-a-half months before the fateful day when Pakistani terrorists struck the Army’s Administrative base in Uri sector of J & K. He was among the 19 Bravehearts who laid down their lives in the line of duty on 18th September 2016  during this deadly attack.

Sep Somnath was one of the 19 soldiers who was martyred in Uri Attack in Sep 2016. At around 5:30 AM, on 18 September, four militants attacked the Indian Army brigade headquarters in Uri, in Baramulla district, near the Line of Control in a pre-dawn ambush. They lobbed 17 grenades in three minutes followed by indiscriminate firing by automatic weapons. As a rear administrative base camp, the HQ had a fuel storage facility which caught fire along with tents with soldiers sleeping in them. As a result of this dastardly attack, 17 army personnel were martyred.

Later a gun battle ensued that lasted for six hours during which all the four militants were killed. An additional 30 soldiers were also reported to be injured in the attack. Most of the soldiers martyred were from the 10 Dogra and 6 Bihar regiments. One of the injured soldiers succumbed to his injuries on 19 September at R&R Hospital in New Delhi, followed by another soldier on 24 September, bringing the death toll to 19.

Sepoy Somnath laid down his life protecting the country; the nation will remain grateful to this brave soldier for his courage and supreme sacrifice.