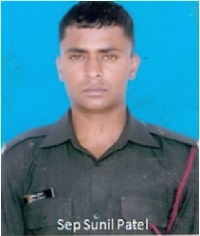 Sepoy Sunil Patel belonged to Balupura village in Godhra tehsil of Panchmahal district in Gujarat. Son of an Army veteran Sep Sunil was serving with  51 Rashtriya Rifles unit in J & K area in 2017. Sep Sunil’s father Takht sinh served in the Army for 28 years and retired in the year 2015. Sep Sunil’s two uncles, brother in law and cousin brother also served in Armed forces. Sep Sunil had got married in 2012 and the same year he had joined Army through Mahar Regimental center at Sagar in Madhya Pradesh.

After serving of a couple of years with his Regiment, Sep Sunil Patel was later deputed to serve with 51 RR unit deployed in J & K area. His battalion 51 RR, was engaged in counter-insurgency operations and was facing challenging situations on a regular basis. During Nov 2016, Sep Sunil had taken 40 days of leave and had rejoined the duty on 6 December 2016, a couple of weeks before the horrific avalanche in Jan 2017.

Sepoy Sunil Patel was one of the 15 soldiers who lost their lives in an avalanche at Gurez sector of North Kashmir on 25th Jan 2017. There was heavy snowfall at the beginning of Jan 2017, resulting in multiple avalanches in Jammu and Kashmir. The Chandigarh based Snow and Avalanche Study Establishment had warned of more avalanches in Jammu and Kashmir and Himachal Pradesh in Jan 2017. The first avalanche hit Gurez on 25 of January morning, in which a family of four civilians had died. The second took place around the same time in Sonmarg, chiefly a tourist area, where an army camp was located.

The avalanche that proved deadly for the army hit the post at Neeru village in the night of 25 Jan 2017. The post at Neeru village was located in Tulail area, 25 Kms away from Gurez town in North Kashmir. The place located along the LOC normally remains cut off by road in winters. The avalanche hit the area few hundred meters away from HQs of 51 RR unit and trapped the soldiers, who were on patrol. The army dispatched the rescue teams and seven soldiers could be rescued but, Sep Sunil Patel, who had been buried in snow, could not be saved. Sep Sunil Patel was a gallant and dedicated soldier who laid down his life in the line of his duty.