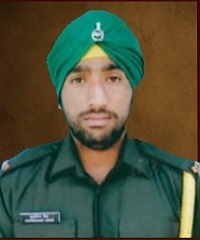 Sepoy Sukhwinder Singh hailed from Hakamsingwala village of Bhagta Bhaika Tehsil in Bathinda District of Punjab. Sep Sukhwinder Singh  after completing his studies, joined the Indian Army at the age of 20 years in 2012.

During 2018, Sep Sukhwinder Singh’s unit was deployed in Kupwara district of J & K along the LOC. India shares around 3000 Km border with Pakistan in which around 740 km of LOC falls in Jammu & Kashmir. The LOC is highly active and volatile where cease fire violations occur very often in this area. In the year 2018, 633 ceasefire violations were recorded along the LOC and the International Border in Jammu and Kashmir in first two months of 2018. Of these 432 incidents were reported from the Line of Control and 201 on the International Border. Besides cease fire violations, the LOC in Kupwara district is also used by the militants for infiltration into Indian territory. Army deploys armed patrols on a regular basis to check infiltration and Sep Sukhwinder Singh was part of one such patrol on 06 June 2018 in Keran sector of Kupwara district.