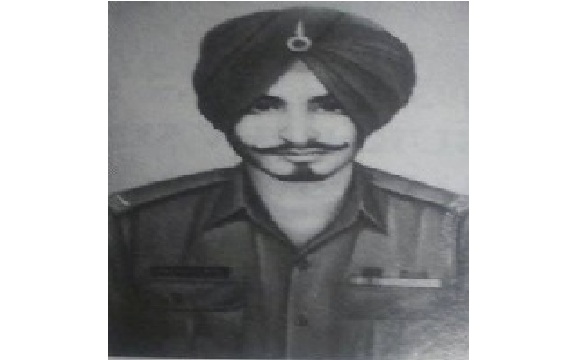 Sepoy Sukhwant Singh hailed from Waraich village of Amritsar district in Punjab and was born on 03 Apr 1963. He joined the army and was recruited into 13 Sikh LI of the Sikh Light Infantry Regiment, an infantry Regiment known for its brave soldiers and rich history of various battle honours.

During Oct 1987, Sep Sukhwant Singh's unit 13 Sikh LI got deployed in Sri Lanka as part of IPKF operations.  The IPKF launched its first operation on 9 October 1987, after formulating a multi-pronged strategy to take on LTTE. Code-named Operation Op Pawan, it was expected to neutralize LTTE operational capability in and around Jaffna. This included the capture or neutralization of the LTTE’s chain of command, which was expected to leave the rebel movement directionless in the face of the impending assault on the LTTE strongholds by the IPKF.  On 10 October 1987, Intelligence inputs suggested that the LTTE leadership, which included not only Prabhakaran but also his deputies like Mahatiya and local military commanders were going to attend a meeting at their tactical HQ at Kokkovil in the Jaffna University campus on the night of October 11th.

The Army decided to utilize this opportunity of capturing them all and cut short the bitter fighting that lay ahead for the capture of Jaffna.  A Special Helicopter Borne Operation (SHBO) was planned in which troops would be dropped in Jaffna University. The troops, would try to capture the LTTE Top leaders in a lightning strike and bring to an end the resistance of the LTTE. The SHBO was planned to be carried out on the night of Oct 11/12, when the Helicopter force would have to heli-drop IPKF Troops in the football ground in the Jaffna University Campus. The Troops allocated for the mission were 120 Commandos from 10 th Para Commando and about 360 Troops from the 13th Sikh LI . At that time 13th Sikh LI was still under induction, with troops arriving into Jaffna airport by flights.

Soon after the 13 Sikh LI battalion touched down at the Palai airfield on 11 October 1987, it was tasked to undertake a heliborne operation the same night, drop behind enemy lines and secure the enemy headquarters around Kokkovil. The Battalion, minus two companies, which had landed, was to fly out in 14 sorties commencing 2300 hours. Delta Company, under Major Birendra Singh, was to move in the first wave, take over the helipad from a team of 10 Para Commandos and secure it for the subsequent landing of the battalion. On 12th October, 1987 at about 0200 hours, Sep Sukhwant Singh along with his rifle platoon, was heli-landed deep into the militant's stronghold in the Kokkovil area in Sri Lanka. Immediately on landing, his platoon was heavily surrounded and came under very effective and extremely intense automatic fire.  Sep Sukhwant Singh fought heroically defending his platoon position and engaging militants' fire.  But after a heroic fight, all the members of this platoon were killed except three. By 0800 hours they had exhausted all ammunition, but undeterred and with high morale, he fixed his bayonet charge. Sep Gora Singh who was severely wounded was asked to give covering fire. Knowing full well that a bayonet charge would be very risky, Sep Sukhwant Singh along with the other surviving soldier Sep Kuldip Singh went ahead and charged at the militants. However while doing so, he received multiple gunshots and was martyred.
Eventually only one soldier Sep Gora Singh survived, who was captured alive by the LTTE.  Besides Sep Sukhwant Singh the other 28 fallen soldiers included Major Birendra Singh, Subedar Sampuran Singh, Hav Ajit Singh, Hav Swaran Singh, Hav Kashmir Singh SM, L/Hav Sher Singh SM, Nk Surjit Singh, Nk Gurmail Singh, Nk Mukhtiar Singh, Nk Satwinder Singh, L/Nk Hira Singh, L/Nk Manjit Singh, L/Nk Darshan Singh SM, Sep Lal Singh, Sep Ranjit Singh, Sep Jarnail Singh, Sep Sohan Singh, Sep Gurdial Singh, Sep Gurbax Singh, Sep Gurnam, Sep Satnam Singh, Sep Joginder Singh, Sep Sakinder Singh, Sep Bakshish Singh, Sep Somnath Singh, Sep Harjinder Singh, Sep Kuldip Singh and Sep Sukhwinder Singh.
Sep Sukhwant Singh was awarded “Vir Chakra, on 26 Jan 1988 for his outstanding courage, determination and supreme sacrifice.

On the 12th October 1987, at about 0200 hours, Sepoy Sukhwant Singh along with his rifles platoon was heli-landed deep into the militant's stronghold in the Kokkovil area in Sri Lanka. Immediately landing. His platoon was heavily surrounded and came under very effective and extremely intense automatic fire.  Sepoy Sukhwant Singh fought heroically defending his platoon and engaging militants firing. But after a heroic fight, all the members of this platoon were killed except three. By 0800 hours they had exhausted all ammunition, but undeterred and with high morale, he fixed his bayonet, and took the other surviving Sepoy Kuldip Singh with him in a bayonet charge. Sepoy Gora Singh who was severely wounded was asked to give covering fire. Knowing fully well that a bayonet charge would mean certain ” death”, he preferred to charge at the militants and get killed gallantly rather than passively remaining in his position.

Sepoy Sukhwant Singh thus displayed conspicuous courage and valour in the face of the militants.