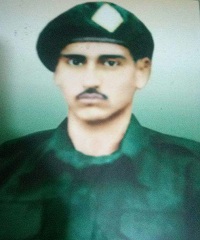 Sepoy Sukh Ram was born on 26 November 1938 in Malyawar village in Bilaspur district of Himachal Pradesh. Son of Shri Lakhu Ram, Sep Sukh Ram always wanted to join the Army since his childhood and followed his dream as he grew up. At the age of 21 years he joined the Army on 26 Nov 1959 and was recruited into 3 Dogra of the Dogra Regiment, a regiment known for its brave soldiers and various battle honours.

During the Indo-Pak war of 1965, Sep Sukh Ram’s unit 3 Dogra was deployed in the Poonch sector. Following failure of Operation Grand Slam, the infiltration attempt in J & K in August, 1965, Pakistan decided to launch its offensive operation in Chhamb in order to capture Akhnoor, thus cutting off lines of communication to Poonch Sector. Subsequently operations were to be progressed to Jammu to cut off the Valley from the rest of the country. Though Indian forces had captured the strategically important  Hajipir pass by 28 Aug 1965, the battles were raging in various other sectors to gain control over militarily significant territories. One such battle was being fought by the Dogra Regiment in the Poonch sector.

On 6th Sept 1965, Sepoy Sukh Ram along with his section was leading an attack on an enemy post in Poonch Sector. However the section of 3 Dogra faced stiff resistance from the enemy forces as the post was very well defended. Sep Sukh Ram realized that the two LMG posts of the enemy were posing great danger to his comrades and had to be neutralized somehow to pave the way for advance towards the given objective. Sepoy Sukh Ram in a daring action with total disregard to his life rushed forward with four grenades towards the enemy post. In spite of strong enemy position, he managed to attack one LMG post with two grenades and silenced it. Then he moved towards the other LMG post and lobbed a grenade at the enemy soldier who was manning it. During this action Sep Sukh Ram got two bursts of LMG on his head and chest and was seriously injured. Sep Sukh Ram later succumbed to his injuries and was martyred. Sep Sukh Ram was a gallant and dedicated soldier who laid down his life in the service of the nation.

On 6 September 1965 when Sepoy Sukh Ram’s section was leading an attack on a well-defended enemy post in the Poonch Sector, his company came under heavy enemy fire which rendered further advance impossible. Sepoy Sukh Ram rushed forward with four grenades. In spite of stiff opposition, he managed to close in, dropped two grenades in an enemy trench and destroyed an LMG. He then dashed to another LMG and lobbed a grenade at the enemy manning the LMG. While doing so, he got two bursts of LMG fire in his head and chest as a result of which he died.