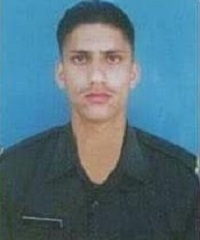 Sepoy Shammi Singh hailed from Makroli village in Indora tehsil in Kangra district of  Himachal Pradesh. He joined the Army in 2012  at the age of 21 years. During 2016-17, Sep Shammi Singh’s unit was deployed along the LOC in Nowgam sector of J & K.

During 2017, Sepoy Shammi Singh’s unit was deployed in Nowgam sector in Kupwara district along the LOC in J & K.  The sector is heavily militarized and soldiers are stationed on mountaintop posts to guard the Line of Control and prevent infiltration of militants. On 11 Dec 2017, the Nowgam sector, located in the mountainous northern region of the Kashmir valley, received heavy snowfall resulting in avalanches in the area. Sep Shammi Singh was part of an operational team stationed at the post on one of the formidable heights along the Line of Control. The heavy snowfall and avalanches triggered snow slides in the area and engulfed the soldiers on patrol. Sepoy Shammi Singh and Sep Kaushal Singh got swept away and went missing.  Though the body of Sepoy Kaushal Singh could be recovered on 16th Dec 2017 by the rescue team, Sep Shammi Singh remained untraceable.

The Army launched concerted efforts and pressed the specially equipped Avalanche Rescue Teams into service to search for the missing soldier, Sep Shammi Singh. However, the rescue operation was called off after searching for several days in that area. The search and rescue operation was resumed after the snow melted nearly six months after the incident. Eventually the rescue team was successful in recovering the body of Sep Shammi Singh on 14th Jun 2018. The mortal remains of the brave-heart were transported from the Nowgam sector to 15 Corps Headquarters at Badamibagh cantonment in Srinagar where homage was paid by Major General SK Sharma, Chief of Staff Chinar Corps and all ranks on behalf of the proud nation. Later the body was flown for the last rites to his native place in Himachal Pradesh. Sepoy Shammi Singh was a brave and committed soldier who laid down his life in the service of the nation.

Sepoy Shammi Singh is survived by his parents.